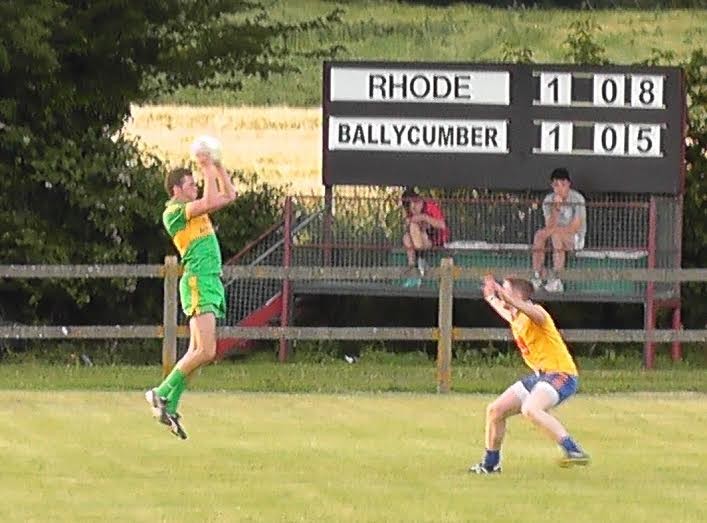 Ballycumber and Rhode faced off in fine summer evening conditions last Wednesday. The game was the third group stage game for both in the 2014 Tullamore Court Hotel Offaly Senior Football Championship. Ballycumber started their campaign with two tough losses to St.Rynaghs and Clara. Rhode on the other hand have started the year in familiar style by posting two comfortable wins over Clara and Ferbane. However this game was not to be as one sided as many expected.

Rory Guinan got Ballycumber off the mark with a 30 yard free in the seventh minute only for Rhode to fire over three more points in quick succession. Ballycumber were sitting very deep and allowing Rhode to gain easy possession off short kick outs. In the eighth minute a good Rhode move from a short kick out ended in Alan Mc Namee finding Niall McNamee with a long ball into the full forward line. Niall did the necessary and slotted over for Rhode’s forth point. Only a minute later McNamee had his second. Again he won possession off a long ball in, this time provided by Anton Sullivan, and lost his marker to score.

Conor McNamee won possession off the ensuing kick out, ran 20 yards with ball and fired over a fantastic individual point from 40 yards. Rhode now led by five points. Gary Larkin closed the gap for Ballycumber in the 11th minute. Larkin made a run down the right and fired over on his right foot from the tightest of angles. Rhode though continued to find Niall McNamee with long balls. In the 15th minute McNamee again won possession and this time played Anton Sullivan in on goals. Sullivan smartly hand passed to the onrushing Paul McPadden who provided the finish and Rhode’s first goal. The score line was now 1-6 to 0-2 in Rhodes favour. 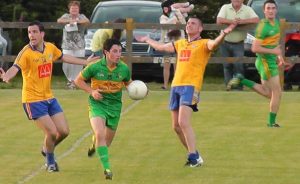 The teams traded points in the next few minutes. Gary Larkin again caused problems in the Rhode defence and was unlucky to see his firmly struck effort go over the bar rather than test Kenneth Garry in the Rhode goals. At the other end Niall Darby kicked over a point from 40 yards after beating a pair of Ballycumber defenders. The following ten minutes yielded no scores for either team but were not uneventful. Rhode were threatening to put the game away and had two real goal chances stopped on the line by Ballycumber defenders.

The first of these goal chances fell to Pauric Sullivan. After a great interception and run by Alan McNamee in midfield Sullivan found himself in space for a shot on goal. His low effort was blocked on the line. The second goal chance came after Niall McNamee jumped above two Ballycumber defenders on the edge of the six yard box and attempted to punch the ball on into the goals. McNamee’s effort came up just short as it too was cleared off the line. Rhode were made to pay for missed opportunities. In the 27th minute Gary Larkin was left unmarked behind the Rhode defence, Larkin was picked out with a fine pass and he fired high across the goalkeeper and into the net. Niall McNamee tapped over a short free in added time to make the half time score 1-8 to 1-3 in Rhode’s favour.

Ballycumber seemed to gain encouragement from their strong finish to the first half. In the 32nd minute Rory
Guinan kicked over a 30 yard free to reduce the deficit to four points. Two minutes later Guinan again was on target, this time from a 20 yard free. He was fouled off the ball and slotted over the free to leave only three points between the teams. Ballycumber began to cut the supply of long ball to the Rhode forwards. Colm Quinn and Chris McDonald were both now being employed as sweepers in front of the Rhode full forward line. Rhode became frustrated and Ballycumber began to believe they could get something out of a game that early had seemed beyond their grasp.

The next score didn’t come until the 45th minute. A battle for possession in midfield went Ballycumber’s way and when the ball was played out to Adrian Kelly he kicked over a point from 40 yards. Ballycumber now only trailed by two on a score of 1-8 to 1-6. Unfortunately for a hard working Ballycumber team the games critical score came for Rhode in the 50th minute. Abandoning the long ball tactics, Rhode began to run at the Ballycumber defence and after a fine run and hand pass by Alan McNamee Pauric Sullivan fisted the ball past the onrushing Leo Guinan and into the Goals. Rhode had breathing room again.

Ballycumber to their credit didn’t give up. Gary Larkin added another point to his impressive haul and Rory Guinan tapped over after a great run from late substitute Cormac Quinn. However Rhode were just too strong in the end. Substitute Stephen Hannon set up a Niall Darby point with a fine cross field ball and scored one himself a moment later, Hannon was left with an easy finish after a bulldozing run and pass by Pauric Sullivan. The game finished a Rhode win on a score line of 2-10 to 1-8.

Man of the match: Alan McNamee