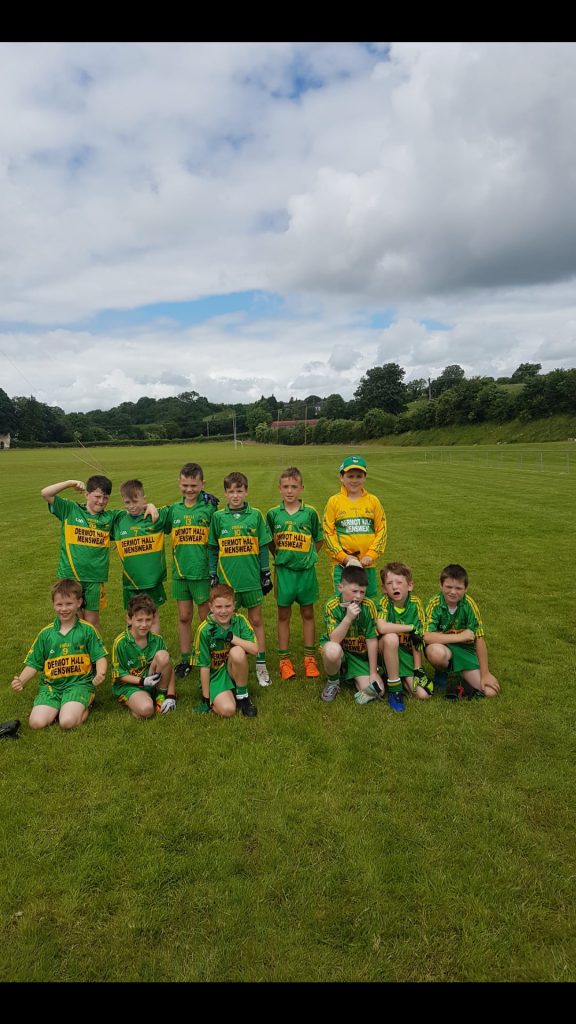 Massive Congratulations to our U,10 footballer;s who have reached the Leinster Semi Finals which take place on July 14th  following two big wins on Saturday last. In the first game Rhode defeated Arle’s of Laois on a score-line of 1-07 2-02 to reach the Quarter final where they defeated Castlepollard 4-14 to 4-04  to reach first Leinster finals since 2002.

The Semi Final and Finals for the Leinster Community Games takes place in Trim on Saturday July 14th a bus will be leaving Otoole’s Car Park around 8am for the player;s/parents .Should anyone be interested in taking a seat on the bus please contact Declan Curley 0n 0872849584. limited number of seats available.

Very best of luck to our U,15 footballer’s who play Tullamore this coming Sunday June 24th evening in Gracefield at 7pm in the  White League Final .

Rhode Junior B footballer’s take on Shamrock’s in the championship this Friday June 22nd at 8pm.

Rhode U,11 Footballer’s took on Na Fianna in Fr.Dowling park Rhode on Thursday last. A fantastic game of football was played  with both teams giving a wonderful display of their skills.

This Coming Saturday June 23rd Rhode U.11’s are hosting the following teams in a series of friendlies Templeogue Synge (Dublin)  and Corralstown/Kinnegad (Westmeath) . All Kicks off at 2pm Saturday in Fr,Dowling Park Rhode. All welcome to come along and watch our fellow Stars.

We urge all faithful supporter’s if at all possible get into O’Connor Park on Sunday and get behind our boy’s .

There was no winner of the Rhode GAA Lotto Draw that took place on the 12th of June for a Jackpot of €15,000.  The numbers drawn were 5 15 23 27.  The club would like to thank all those who supported the draw and thanks to Doyle’s for the use of their premises and for their help and cooperation.  The following matched three numbers and received €100 each.

Get well wishes are extended to all of the people of the parish who are ill or hospitalised at the moment especially Mary Murphy who is recovering from a hip operation. We wish you a speedy recovery Mary.

May Rosie Rest In Peace