McPadden Under 21 Player of the Year 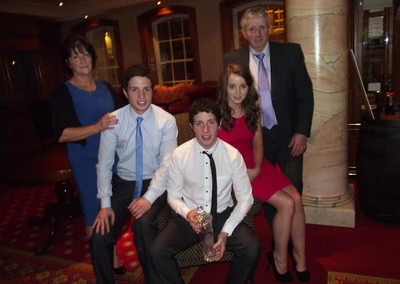 The Offaly GAA Awards night took place on Saturday night in the Bridge House who sponsored the event and it again was a great occasion with a huge crowd attending. All the award winners got a great reception by the excellent M.C Michael Duignan. There was a standing ovation for both the hall of fame award winners Paudge Mulhare and Mike Ryan. Rhode’s Paul McPadden won the Under 21 award a great achievement for a very committed player to add to his Minor award he received three years ago. All at the club congratulations Paul on his achievement.

Offaly Senior footballers were beaten by Laois in Portlaoise on Wednesday evening last and after a good competitive game Offaly were eaten by six points 2-18 to 1-15. On the team and panel from the club were Conor McNamee who made his senior inter county debut and well done to Conor for that, Niall Darby, Niall McNamee and Pauric Sullivan. Offaly Senior footballers played their third game in a week in the O’Byrne Cup when on Sunday they were beaten by Wexford in O’Connor Park on a 0-16 to 0-13 score line. This ended their O’Byrne Cup competition, UCD qualified out of Offaly’s group for the semi-final they will play Kildare.

Offaly Under 21 footballers were beaten by Mayo at a Mayo venue on Saturday on a score line of 2-10 to 1-4. On the team and panel from the Under 21 Parish side St. Michael’s were Conor McNamee, Philip Foy (Clonmore Harps) and Thomas Mooney (St Brigid’s).

Offaly Under 21 footballers gained their first points in this year’s Hasting Cup when they had a 1-11 to 2-7 win over Longford in Conbullogue on Saturday. On the team from Rhode was Conor McNamee.

Offaly Senior hurlers were narrowly beaten by Galway in a very competitive Walsh Cup quarter final in Tullamore on a 1-14 to 1-13 score line.

Membership of the club is now due and can be paid to any of the club officials who are as follows Patricia McManus, Mary Hannon, Jody Kilmurray, James Murphy, Ger Noonan and John Glennon. Subscriptions are as follows

Sympathy is extended to the Lynch family of Clonin Rhode on the death of Mary whose remains were interred to Croghan cemetery. Mary was a lovely person, a pleasure to meet with who was always in good humour and a great character. Mary was ill for the last few years from cancer. To Sean and family all at the Rhode GAA Club sends their deepest sympathy. May she rest in peace.