Semi Final Spot For Offaly U21 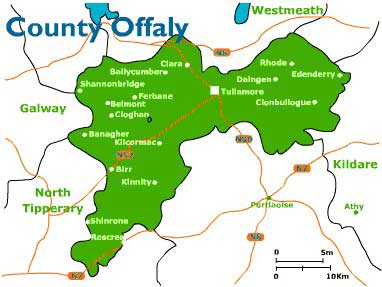 Offaly Under 21 footballers qualified for the semi-final of the Leinster Under 21 championship when they had a fully deserved 0-13 to 0-9 win over the Leinster champions of last year Kildare on Wednesday night in Athy. Offaly led by six points to five at the interval and in the end were four points ahead at the final whistle. Offaly will now play either Meath or Louth in the semi-final as this game ended in a draw Wednesday night on a score line of 3-11 to 2-14 after extra time. On the team and panel from the Rhode parish Under 21 side St. Michael’s were Ruairi and Conor McNamee (Rhode), Philip Foy (Clonmore Harps) and Thomas Mooney (St. Brigid’s).

Offaly senior footballers suffered their fourth straight defeated by Longford in O’Connor Park on Sunday. This defeat means that Offaly must win their last three games against Roscommon, Fermanagh and Limerick to avoid being relegated back to Division 4. On the team and panel from the club were Niall Darby, Conor McNamee, Niall McNamee, Anton Sullivan and Pauric Sullivan. Offaly’s next game is against Roscommon on Sunday at 2pm in Roscomon.

Rhode 2.5 edenderry 1.8
Our juniors recorded a well deserved draw against near neighbours edenderry.rhode started off slowly going a point behind early on .Rhode soon settled and found themselves 1.2 to a point up after 10 minutes this trend continued for the half with Rhode leading 2.3 to 2 points, but in truth Rhode should of been out of sight by this stage with 6 wides and kicks straight into the keeper, who also had a great half pulling off a string of good saves.The 2ndhalf started brightly until Rhode lost Aidan Brereton through injury, this gave the reds the upper hand which to their credit they made full use of, coming from 7 points down to earn a well deserved draw.leaving the final scores Rhode 2.5 edenderry 1.8I would to thank the lads for a great effort and all the who turned up on the day.
The team
Phil O’Connell
JP McLoughlin, Jake Kavanagh, David Rigney
Colm Rigney, Garreth McNamee, Carl Green,(cap)
Aidan Brethan, Darren Garry
Dan O Brien,(1-0), Niall Cole, Niall McCabe,(0-02)
Liam Grennan,(0-01) Donal Hickey,(1-02), Cieran Hope.

There was no winner of the Rhode GAA Lotto for the week ending 3rd of March for a Jackpot of €15,000. The numbers drawn were 7 11 14 23. The club like to thank all those who supported the draw and thanks to Doyle’s for the use of their premises and for their help and cooperation. The following matched three numbers and received €35 each. Next week’s takes place in Killeeen’s
Joe Malone, Tubberdaly Rhode
Larry Donlan, Killoween Rhode
John Leavy, Clonmeen Rhode
Tony Reilly, Rhodebriddge Rhode
Daire Swords, Priory Lawns Rhode
Doora Glynn, Edenderry c/o Ryan’s Pharmacy Rhode
The Rhode GAA Lotto is the main source of income the club has and now you can play online though our website. The good news is when you play the lotto online you are entitled to free draws, for example pay for seven draws receive the eighth one free, pay for fourteen draws receive two free and so on. In other words, the more you play the more free draws you are entitled to!!

Sympathy is extended to the Hartnett family of Tubberdaly on the sudden and untimely death of Paddy on Sunday morning of last week. Paddy was one of life’s true gentlemen, a great father and husband to Mary, a tremendous provider for his family and especially a hard working man. He was a pleasure to meet up with either socially, at work or at football games. He was also a great supporter of Rhode GAA and would be seen at senior matches and at Rhode Ladies matches and was very proud when either would won their championships. His daughter Martina is and was part of all Rhode ladies success in the last numbers of years. Paddy was laid to rest in Rhode cemetery last week. Deepest sympathy is extended to his wife Mary, sons, daughter, brothers, sisters and extended family. May he Rest In Peace.

PrevPreviousOffaly Minors Lose Out On League
Next€15,000 Still Up For GrabsNext