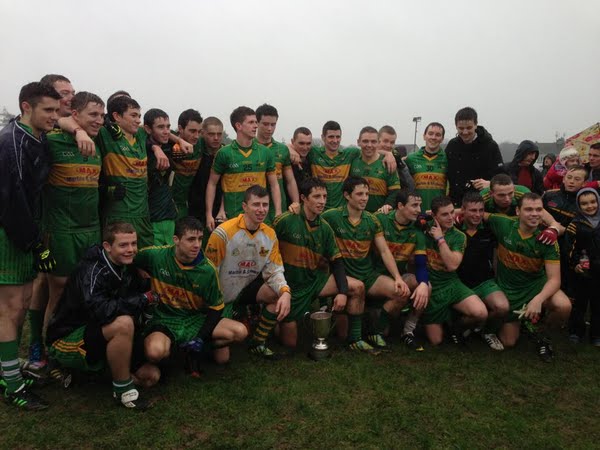 St Michael’s the Rhode Parish Under 21 team recorded their third Offaly Under 21 championship in a row when they a 2-11 to 1-9 win over the Edenderry parish side St Patrick’s. Goals from Paul McPadden and Donal Hickey was crucial in what was an awful day for football. So well done to all the team, panel and management team of Pat Daly, Johnny Mooney, Pauric Dunne, David Egan and Billy Kenneddy. The Daingean Club are to be congratulated for having the pitch in great shape in such bad conditions. The game was well refereed by Martin Carty who let the game flow as much as he could despite the conditions. After the presentation to team captain Paul McPadden the team and supporters returned to Rhode and thanks to Doyle’s where food and refreshments were served.

The best of luck to the Rhode Senior football team, panel and management team who play the replay Division 1 Final for The Casey Cup on Sunday in Walsh-Island at 1pm.

The A.G.M of Rhode GAA Club will take place on Friday 6th of December at 8pm sharp. Motions and nominations for the various positions will be accepted in writing to our club secretary Kenneth Garry up until and including Wednesday the 27th of November.

All members and intending members are invited to attend.

Hard luck to Kilcormac/Killoughey who put in a great battle but were defeated in the end by the Wexford champions Oulart the Ballagh on a score line of 1-18 to 2-11. Kilcormac/Killoughey have given Offaly hurling a great boost in the last few years winning Leinster and getting to the All-Ireland Final last year and getting to the Leinster semi-final this year. Well done to Ballinamere who on Sunday qualified for the Leinster Junior hurling final with a 3-14 to 1-6 win over the Wicklow champions Erie Og (Graystones) in Ballinameere on Sunday.
Hard luck to Birr Junior footballers who were beaten by Hunterstown Rovers of Louth on Sunday in Birr on a 2-15 to 0-6 score line.

Three Rhode players will leave on army duty this week to Chad and are wished a safe stay there. Stephen Hannon and Stephen O’Connell who won Under 21 medals on Sunday and Senior player Declan Murphy.

There was no winner of the Rhode GAA Lotto for the week ending 11th of November for a Jackpot of €15,000. The numbers drawn were 8 13 14 24. The club like to thank all those who supported the draw and thanks to Killeen’s for the use of their premises and for their help and cooperation. The following matched three numbers and received €70 each