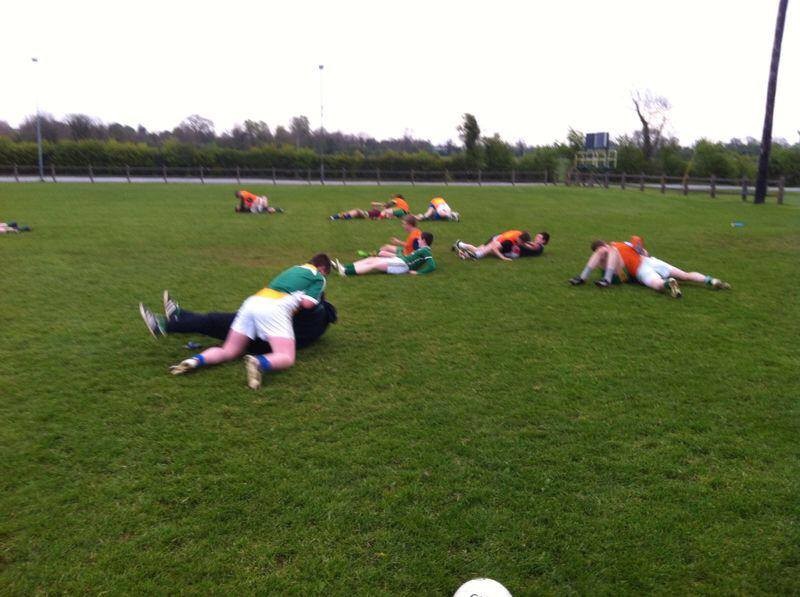 Rhode travelled to Cloghan on Friday last known nothing short of a win would keep them in this year’s championship Rhode with the aid of the breeze started off slowly and found themselves 1-02 to no score down after 8 minutes. Rhodes first score coming from a dead ball by Kieran Hope this settled the lads who for the next 20 minutes played their best football of the year both Kerrigan’s Colin and Keith were in great form and everything seem to be coming from these 2 men. Rhode led at the break 1-06 to 2-02. The second half saw Rhode again start poorly and somehow found themselves trailing by 4 with 20 minutes to go. Rhode introduced Alan Hannon and Pe Murphy this brought new life into the lads. The forward line was making great runs and some lovely points resulted from Kieran Hope Keith Kerrigan and Anthony Highland to leave the sides level Karl green put Rhode ahead with a well taken point out on the right before pe Murphy slotted one over from close range to secure a well deserved victory. Rhode play Clara on Sunday at 6 in Rhode.
Phil O’Connell
Derek Cocoman, John Murphy, Rick Cully
Colm Rigney, Brendan Curley, Karl Green (0-1)
Brian Cassidy, Owen Hickey
Keith Kerrigan (0-4), Colin Kerrigan (0-1), Liam Grennan (0-1)
Kieran Hope (1-2), Paul Glennon, Liam Jenickel

Offaly Senior footballers bowed out of the All-Ireland Qualifiers when on Saturday evening in Aughtim they were defeated by Wicklow on a score line of 3-12 to 0-17. After the game the Offaly senior manager Emmet McDonald resigned he and his management team are to be thanked for the efforts they put in after the last couple of years. On the team and panel from the club were Niall Darby, Brian Darby, Anton Sullivan, Niall McNamee who captained the side and scored ten points, Shane Sullivan, Pauric Sullivan, Conor McNamee, Paul McPadden and James McPadden.

Under 21 Leinster Championship Offaly v Wexford in Wexford Park on Wednesday at 7.30pm

Rhode Under 12 footballers received a walk over from Shannonbridge on Tuesday evening in a game which was due to be played in Rhode.

O’Connor Park hosted Kilkenny v Galway in the Leinster senior hurling championship semi-final on Sunday in what was a memorable game. The replay is on Saturday and the club would like to thank the club members who acted as stewards and they are asked to do the same on Saturday.

Many years of health, wealth and happiness is extended to excellent club man Niall Cole who got married to the lovely Fiona on Friday of last week in Drogheda Co. Louth. The newly married couple are wished the very best in the years ahead. Niall is a tremendous servant to the club over the years, and it is hoped to see him in the Green and Gold when he returns from his honeymoon. Also many years of wedded bliss is extended to great Rhode support David Aspell and his new wife Fiona Farrelly who were married two weeks age.

There was no winner of the Rhode GAA Lotto for the week ending 16th of June for a Jackpot of €15,000. The numbers drawn were 18 20 22 25. The club like to thank all those who supported the draw and thanks to O’Toole’s for the use of their premises and for their help and cooperation. The following matched three numbers and received €200

he Rhode GAA Lotto is the main source of income the club has and now you can play online though our website. The good news is when you play the lotto online you are entitled to free draws, for example pay for seven draws receive the eighth one free, pay for fourteen draws receive two free and so on. In other words, the more you play the more free draws you are entitled to!!