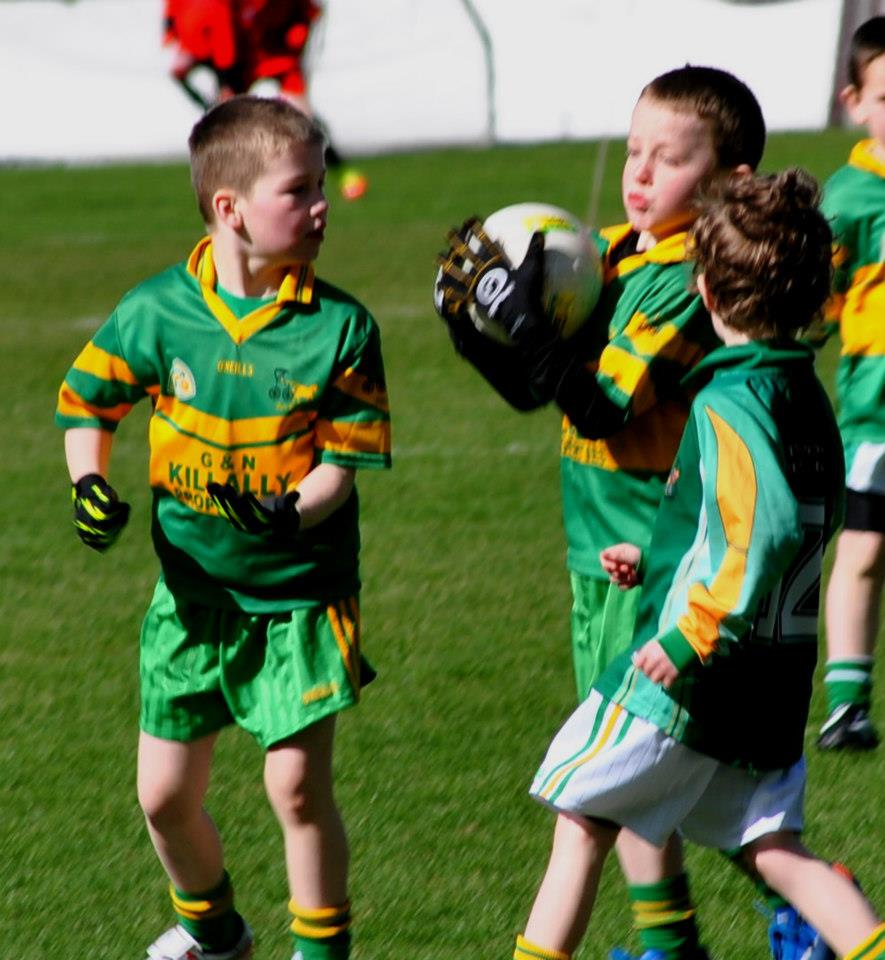 In conjunction with Leister council and the Offaly GAA County Board the club held its annual Summer Camp last week. Again as in other years it was a huge success with a big turn out from the children of the parish from Monday until Friday from 10am until 2.30pm they had great fun and games and lifelong friends were made. All the skills and aspects of the Gaelic games were thought by the excellent coaches supplied by the Offaly GAA committee Alan Mulhall and Paul McConway. The weather apart from Friday was excellent and the club would like to thank the mothers for the cul camp been such a success. The three schools of Ballybryan, Rhode and Croghan all took part in the camp. The Offaly GAA coaches were Alan Mulhall and Paul McConway and the following coaches who were part of the coaching team in the Rhode camp were.

On the Friday of the camp Rhode and Offaly star to the delight of the children Anton Sullivan also took part in the camp. The club would also like to thank Oliver Murphy who made sure that everything was right at the field and for the coaches and the children. Minor Club Chairman Cathal Swords who did tremendous work and for looking after the refreshments gave by the Rhode GAA Club to all the children on the Friday. Thanks is also expressed to the parents for helping out and making the week such a success for the children. For the second year in a row we had the longest travelling participant Isabelle Leavey from Manhattan New York took part in the camp. Isabelle is the daughter of Danny and Ann Leavey who for the past twenty years or so have been living in the U.S.A Isabelle is very welcome and has made loads of friends.

Rhode Senior footballers play Ballycumber in the third round of the Offaly championship on Thursday evening in Killeigh at 7.45pm with Fergal Smyth of Killclonfert the referee.

Rhode Intermediate footballers play Cappincur in the third round of the championship on Sunday at 12noon in Daingean.

Rhode Under 14 footballers were beaten by St Vincent’s in the second round of the championship on Thursday evening on a score line of 4-16 to 2-9. The game was played in Rhode.

There was no winner of the Rhode GAA Lotto for the week ending 14th of July for a Jackpot of €15,000. The numbers drawn were 5 13 21 29. The club like to thank all those who supported the draw and thanks to Killeen’s for the use of their premises and for their help and cooperation. The following matched three numbers and received €100 each

The Club congratulates and welcomes our curate Fr. Greg Corcoran as the new parish priest of the Rhode parish and Clonbullogue parish. Fr. Greg has been curate in Rhode for the past six years and he has done great work in the parish. Fr. Greg is wished the best of luck in his new position and look forward to working with him over the next numbers of years. Thanks is also expressed to Fr. P.J McEvoy who for the past six years has been our parish priest and in that time he has also served the community brilliantly. Fr. P.J remains on as parish priest of Edenderry.

Sympathy is extended to the Burke family on the death of Thomas whose remains were interred in Edenderry cemetery on Monday week last. The deceased is a brother of Bridget Kerrigan of Tubberdaly. May he Rest In Peace