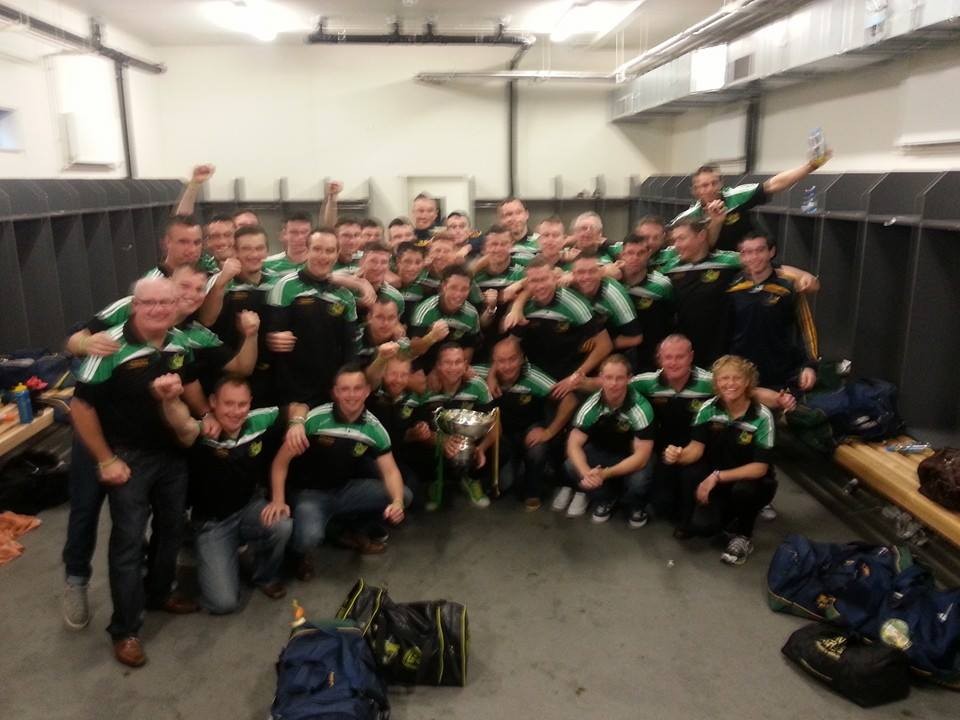 Rhode back on top

For the first time since 1998, Rhode saw off their near neighbours and arch rivals Edenderry to collect the Dowling Cup for the 26th time in their clubs history following a disappointing battle on Sunday afternoon last.

Played in O’Connor Park, Tullamore this game unfortunately failed to love up to its pre match expectations and really even though without doubt we had the best two clubs of the year on show, the game never came to life.

Rhode won’t mind that one bit, they went about their task in an extremely professional manner and it was their start of the second half blitz that killed off any chance of an Edenderry come back and in the end Rhode were fully deserving of their seventh title since 2004.

In the end three points might have only separated the sides, but in reality Edenderry were playing catch and mouse for long spells and with eight first half wides Rhode should have been out of sight y the half time whistle.

It certainly is the final that many would have predicted at the beginning of the year, with both sides showing signs early on of what they had to offer. This was the final that Offaly football is crying out for and it certainly drew a crowd from near and far.

An age old rivalry to say the least Rhode and Edenderry over the years have served up some amazing battles and in the opening few minutes it looked like we were looking at a humdinger of a battle with the Reds making all the moves at the start but really the game just petered out.

Heading into this tie it was an extremely hard one to call, as Rhode bided to overcome their disappointment of last year’s final defeat, while Edenderry on the other hand aimed to get back to the heights of 2011 that saw them bring the Dowling Cup back to Edenderry for the first time in a staggering ten years.

Sunday was their first meeting since that Final in 2001 – one that Edenderry won following a replay but that certainly meant for nothing, but in reality it had to be at the back of Rhode’s mind as they tried to topple the side the that hadn’t beaten in a final since 1998.

Both sides from the outset of the year have been extremely inform and apart from their clashes against Gracefield in Edenderry’s case and Ballycumber in Rhode’s they have literally swept aside the challenge of what the rest of the county had to offer and it more than fair to say that Offaly witnessed the best two teams on the field on Sunday.

Edenderry and Rhode without doubt have been two of the biggest success stories when it comes to football in Offaly over the past decade. Back boning Offaly football for the past number of years these two clubs knows what it takes to be successful and in Sunday everyone was hoping that this Final would come to life but it failed and in the end Rhode won’t mind that one bit they have the Title once again.
Edenderry naturally will be extremely disappointed but this is a very young side with bags of talent in their ranks and there is no doubt that they will be back and as much as they will want to forget about Sunday’s match, it will certainly be a driving force for them for next year as they bid to get back on top of Offaly football once more.

It was Edenderry who hit the ground running and had the first three attacks on the Rhode goalmouth but it was a free from Derek Kelly who finally got them off the mark two minutes in.

It wasn’t too long until Rhode started to find their groove and by the 9th minute they hit the front. Niall McNamee levelled matters on the fifth minute and within sixty seconds he hit them to the front just before Anton Sullivan’s rasper of a shot rattled off the crossbar to give Rhode a 0-3 to 0-1 lead.

That same man again Niall McNamee lofted over another score on the 15th minute, but within seconds from being sprung from the bench Adam Mahon gave the huge Edenderry following reason to cheer with a marvellous point.

Rhode however were still edging it throughout the field and in a brilliant build up between Anton Sullivan and Alan McNamee found Niall Darby and with a sweet score off his left Darby brought the scores to 0-6 to 0-3 with twenty four minutes played.

But that’s when Edenderry upped the ante. Sean Doyle fired over the next score on the 27th minute and then with a massive chance Richie Dalton should have left only one between the sides, but his shot that looked destined to be going over the bar just fell short to leave the half time scores reading 0-6 to 0-4.

The ultimate difference between the sides came at the start of the second half with Rhode literally swept aside the challenge of what Edenderry had to offer and with five scores in quick succession from Paul McPadden (2), Niall McNamee (2) and Niall Darby Rhode were in the driving seat 0-11 to 0-4 and it really was all looking very ominous indeed for the Reds.

Edenderry tried in vain time and time again launching high ball after high ball in on top of Aaron McDonnell but man of the match Eoin Rigney commanded the area from start to finish.

The Reds did however make it for an anxious finish for Rhode when a free from Sean Doyle dropped short and with Mark Young on hand to fist the ball to the back of the net, the Rhode lead was whittled down to four 0-11 to 1-4 with fifteen to play.

Edenderry now had the momentum but it soon became undone when Richie Dalton saw black for a late foul and with that any chance of a comeback dwindled away.

Niall McNamee and Derek Kelly traded scores by the 20th minute, just before a fabulous score from Paul McPadden left Rhode 0-13 to 1-5 in front.

Edenderry did manage two more scores thanks to Sean Moriarty and Sean Doyle, but in the end it was Rhode’s day to shine. The final scores reading 0-13 to 1-7.