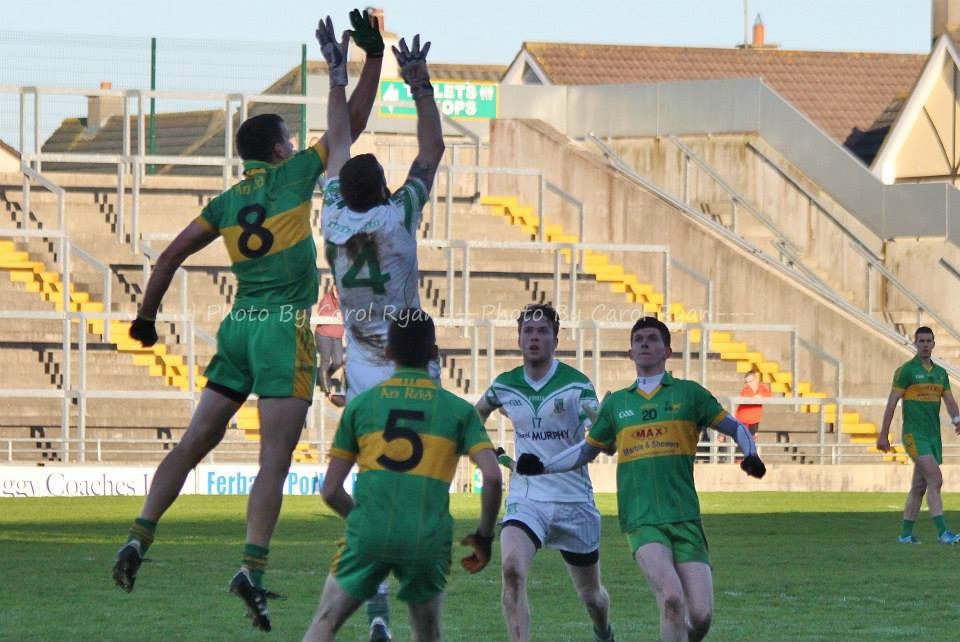 To Class Rhode wipe the floor with Moorefield

It is often said “good things come to those who wait”. Sunday afternoon last summed that one up in bucketful’s as Rhode inflicted the ultimate pay back on Moorefield following what was nothing short of a top class performance to book their place in the Final decider.

Rhode withstood a second half Moorefield comeback to send out yet another warning signal as they find themselves a mere sixty minutes from Leinster Glory following an extremely professional and impressive win in O’Connor Park, Tullamore.

For Rhode this is their fourth Leinster Final appearance since 2006 and one thing is for sure this current Rhode side has many a trait in common with the sides of the past and there is no doubt that they will give it their all when they face off against the current All Ireland Champions St Vincent’s on 14th December.

What a first half display it was from the Offaly champions. Rhode set about their business from the off and for a side who was expected to struggle by the so called experts the men from the North Offaly Village set about their task and performed it extremely well.

Having last met in 2006 when Rhode were seen to be at their height and with a Leinster Title at their beckon call, Moorefield taught Rhode a severe lesson that day and certainly the ultimate pay back came to the side who have bided their time and when they got the chance they literally swept the floor with Kildare’s best.

Rhode now join four other Offaly clubs in Leinster Club Finals – Kilcormac/Killoughey, Clara and Shamrocks and for a county who is deemed to be struggling it’s not bad going at all!

Rhode who had two massive battles heading into Sunday and with hard earned but deserved wins over Louth’s St Pats and Meath’s Navan O’Mahoney’s this Rhode side have proven the more they progress the better they become and Sunday was no different.

The talk heading into O’Connor Park was that of the “top class” midfield that Moorefield possessed but one sure thing this Rhode side never allowed them to find their rhythm at all and it begged the question what Moorefield midfield!

Rhode for so long lorded the middle sector of the field. They crowded Moorefield out from the start some brilliant defensive work they quelled anything Moorefield even tried to offer.

Rhode were on top from the get go and as early as thirty seconds in they stamped their authority of this one with Niall McNamee bisecting the uprights at ease.

A Free from Eanna O’Connor did draw the side’s level, but that was to be their only score for a staggering twenty further minutes.

Rhode went on a rampage from there and with further scores from Anton Sullivan, Niall Darby and Niall McNamee the Offaly champs were now 0-4 to 0-1 to the good by the 8th minute.

Rhode were lording it throughout the field and when Paul McPadden dispossessed Ross Glavin brilliantly on the full back line Anton Sullivan was on hand to pounce to drive the ball to the back of the Moorefield net. Rhode now a whopping 1-4 to 0-1 to the good.

Rhode could do no wrong now and with further scores from Niall Darby and Niall McNamee following some brilliant interplay between Anton Sullivan and Glenn O’Connell the chants of “Rhode, Rhode” started to become louder and louder in O’Connor Park.

But this game as expected was a far cry from over and when Paraic Sullivan received his marching orders with a black card it was a hard blow for the Rhode men.

It might have been the start of a life line for the Kildare men and with twenty three minutes on the clock Niall Hurley-Lynch finally found a chink in the Rhode reguard who in fairness were defending as if their lives depended on it with Adam Tyrrell raising the green flag with a much needed score for the Moorefield men to leave the scores reading 1-6 to 1-1.

Rhode could have easily wilted but in fairness to them they regrouped brilliantly and with three more scores in quick succession from Niall McNamee, Niall Darby and a truly fabulous score from Paul McPadden extended the Rhode lead to 1-9 to 1-1 with two minutes to the break.

There was one more Moorefield attack and when it looked like Niall Hurley-Lynch had done all the work to raise the green flag, Ciaran Heavey came from nowhere to take the ball off the line to leave Rhode well in control at the break 1-9 to 1-1.

It was only inevitable that Moorefield would come out fighting in the second half and with two quick scores inside the opening three minutes from Ciaran Kelly and Adam Tyrrell the Rhode lead was down to six.

Rhode were starting to struggle and they needed a score and quick and who better than Niall McNamee to be the provider twelve minutes into the restart.

But it was Moorefield who were making all the advances now and when Ronan Sweeney was deemed to be fouled in what was a questionable call by the match official, up stepped Sweeney to the spot and making no mistake he drove the ball to the back of the Rhode net to suddenly bring the scores to 1-10 to 2-3.

Niall Hurley-Lynch added another score by the 15th minute and it was all getting too close for comfort for Rhode but Rhode as we all know had more yet to offer and they certainly regrouped brilliantly.

Niall McNamee broke the Moorefield momentum and with that Rhode upped the ante once again and with four more scores in the trot they suddenly had this game in the palm of their hands once again.

Anton Sullivan fired over this second of the game with a truly fabulous score on the 22nd minute and with further scores from Stephen Hannon, Niall McNamee and Minor star Ruairi McNamee the men from Rhode marched onto the final in flying fashion as Ronan Sweeney received his second yellow card. The final scores reading 1-15 to 2-4.