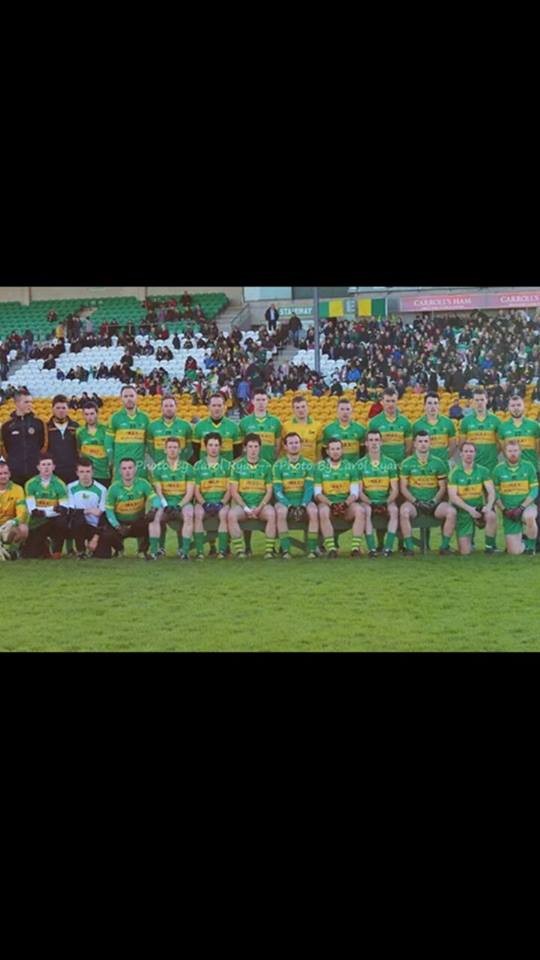 Rhode Senior footballers in their quest to win a Leinster senior club championship were beaten by the current Leinster and All-Ireland champions St Vincent’s of Dublin.  St Vincent’s set down their mark early in this game and led at the interval after playing against the wind 1-5 to 0-2.  Rhode tried their very best in the second half to get back into the game but they couldn’t do so.  While Rhode was defeated they have given us some tremendous displays all year and they have been a credit to the club and county.  Any year you win the Dowling Cup is always great and they also given great displays beaten the Louth champions St Pat’s, the Meath champions Navan O’Mahony’s and the Kildare champions Moorefield. All at the club thank them for their huge efforts and special thanks is also expressed to the excellent team manager Pat Daly selectors Pauric Dunne and Alan Kellaghan. The extended backroom team and also Physio Paula Reynolds who has been excellent job.  To kit man Oliver Murphy who has done a tremendous job always first there and last to leave both at training and matches.  Stats man Eugene McDermott, Paul Glennon also water man Conor Leavey, club secretary Ger Hynes who also did great work in his secretary role.  Thanks to Fr Gregg also to Rhode Community Centre and to Dr. Sheehan for all their help.  Club Chairman James Murphy for his remarkable job done.  Thanks is also expressed to bus driver Tom Flynn who has a great service and also to our video man Vincent McEvoy and to the Offaly county board and O’Connor Park.  Special thanks is also expressed to all who sponsored the club and team on Sunday John Kilmurray Eden Décor, Pat Larkin Bar and Lounge Edenderry, Councillor John Foley who sponsored the meal after the game.  Thanks is also expressed to Mary Hannon, Fionnuala Hickey, Patricia McManus and especially Tracey Murphy who helped with meals for the team on Rhode Hall on the Sundays after training as well as Robert Kellaghan who was always on hand in the hall or the field.  Also to our local butcher Ray Dempsey and Pauric Groome Edenderry for providing the food.  Also to our local schools Rhode and Ballybryan who had their schools decorated in the club colours and for putting up the good look signs outside both schools.  Thanks also to our  fellow parishioners St. Brigid’s for their good wishes.

Thanks also to Doyle’s, Killeen’s and O’Toole’s who sponsored the meals after the three Leinster games.  Also thanks to all our sponsors and to our main sponsor Max Mable John and Alan McNamee.  A huge thanks is also expressed to the Meath county board and their officials.  The Rhode Club would especially wish to thank Navan O’Mahony’s for their hospitality and their great welcome to the Rhode team, management and supporters by their staff it was very much appreciated.  No praise can be too high for our unbelievable supporters who gave us such vocal support it was brilliant and to all the support we got from all around the county the club is inedited for their support which meant that we had at least four to one in our favour.  Finally thanks is expressed to the local papers The Tullamore Tribune Kevin Corrigan and The Offaly Topic Mary Dunne and Peter Carter and Midlands 103 radio for their coverage of all the club games.  Of course a special thanks to our players and team management for an excellent 2014.

Clubs have the opportunity to ease their burden of the levy which clubs have to pay for the refurbishment of O’Connor Park which is now recognised as one of the small stadiums in the county.  The Rhode Club levy is €3,500.  To ease the burden the county board with the approval of all clubs the following scheme is now in place.

The Annual General Meeting of Rhode GAA Club will take place on Friday January 9th in Rhode Hall at 8pm sharp.  All members and intending members are requested to attend.  The meeting was due to take place on Friday the 5th of December but due to the club’s participation in the Leinster Senior Club Final the AGM is now deferred.  All attending the meeting will be requested to sign in on arrival with club registrar Ger Noonan and membership for 2015 can be paid on the night and we ask patrons attending to do the same.

There was no winner of the Rhode GAA Lotto for the week ending 8th of December for a Jackpot of €15,000.  The numbers drawn were 14 16 23 30   The club would like to thank all those who supported the draw and thanks to Doyle’s for the use of their premises and for their help and cooperation.  The following matched three numbers and received €40 each

The lotto on the weekend of 21st of December will have an extra €1,000 along with the Jackpot of €15,000.  There will be 5 €100 and 10 €50 and the draw will take place in O’Toole’s at 9pm.  The Club would like to thank all who purchase tickets, promote the draw and the lotto team who look after every draw it is greatly appreciated by all at the club.  Special thanks is expressed to Killeen’s, Doyle’s and O’Toole’s for their great help and cooperation.

Club Chairman James Murphy and assisted chairman Seamus Maguire attended the Offaly GAA Convention in O’Connor Park.  It was a low key convention with most of the out going management committee being forwarded.  Long serving treasure Andy Gallagher did not go forward and the club would like to thank Andy for his great work over the years.  He was replaced by Martin Boland from Raheen GAA Club.  It was a hallmark night for Rhode Club Chairman James Murphy who was elected development officer of the county board which also means James will be on the management committee of the county board.  He is the first Rhode person to get this very important job and he is wished all the best from the club.

The Rhode national school management committee, teachers and pupils had a fundraiser for cancer on Friday when they were selling hats, scarfs and other things for the game on Sunday and they sold out.  Members of the senior panel went to Rhode school on Friday to the delight of the children.  The Club thanked the school and in particular principal Ms Brady.

Get well wishes are extended to all the people of the parish who are ill or hospitalised at the moment especially to Danny Mangan and it is great to see Catriona Killeen out and about again after her recent illness.