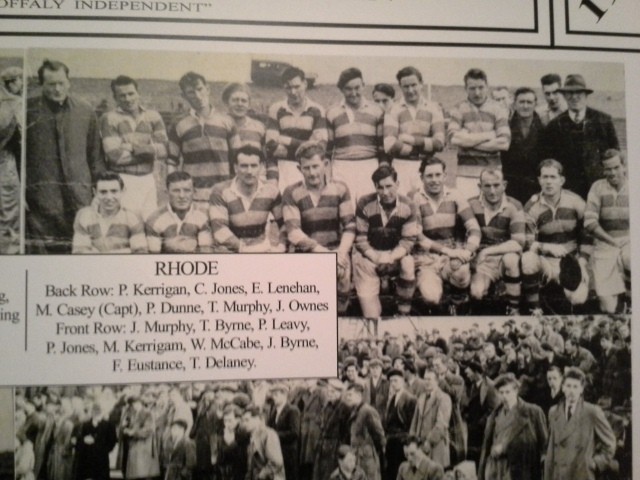 The 127th Annual General Meeting of the Rhode GAA Club took place on Friday night in Rhode Hall.  As usual a great crowd attended and they were welcomed to the meeting by club chairman James Murphy.  The treasures, secretary and minor club reports were giving out next, club treasurer report by Patricia McManus in very detailed and professional manner answered all queries regarding the club’s finances for the year.  Secretary Ger Hynes gave a detailed account of all the club’s achievement which was an excellent report.  Cathal Swords minor club chairman gave a tremendous account of all minor club achievements.  In a rousing chairman’s report James Murphy outlined all the club’s successive in the last year and outlined plans put in place for the future.  We then proceeded over the ratification of officers.

Due to other commitments outgoing Chairman James Murphy did not go forward the chairman position and our new Chairman is Seamus Maguire. Who is wished all the best in his new position. Seamus has being vice-chairperson for the past number of years. There was praise for the outgoing Chairman James Murphy for the tremendous work he has put in over the past 5 years and have elevated the Club both on and off the field to a level as one of the most respected Clubs in the County   an indeed the Country. The Club are indebted to James for his timeless  and unselfish work and is wished the best of luck in his new role on the management committee of the Offaly County Board. Also at the meeting outgoing Minor Club Chairman Cathal Swords also did not go forward for re-election. Cathal has also being chairman of the Minor club for the past number of years and before being chairman was secretary for three years. In A.O.B there were discussions on various aspects of the club activities in what was a very productive and positive meeting.

Offaly senior footballers lost their first game in this year’s O’Byrne Cup when after a very good display they were beaten by Dublin in Parnell Park on Wednesday night on a score line of 0-17 to 0-14.  On the team and panel from the club were Eoin Rigney, Conor McNamee and Pauric Sullivan.  Offaly gained their second win in the O’Byrne Cup when they had a 1-17 to 0-3 win over Maynooth College in O’Connor Park on Sunday.

Offaly senior hurlers got their first win in the Walsh Cup when they recorded a 2-15 to 1-13 win over Westmeath.

Speedy recovery to Rhode and Offaly senior county player Anton Sullivan who had an operation on his knee last week and will be out of football for a few months.  Speedy recovery to Daniel Melloy who was injured in the recent Under 16 league final.

The Offaly GAA Awards will take place on Friday night in the Bridge House Tullamore who sponsors the event.  Players of the year will be awarded to all grades from Senior to Junior A in both hurling and football, referee’s of the year in both codes, handballer of the year and hall of fame inductees in both hurling and football.  Niall McNamee will receive the award for the senior footballer of the year for the third time.  Niall was again outstanding this year and was instrumental in Rhode regaining the Dowling Cup and in reaching the Leinster Senior Club Final.  David Hope of the Fahy handball club in Rhode will receive the handballer of the year as he along with Noel Murphy also of Fahy who won the All-Ireland Intermediate championship, the first in the history of the county a great achievement.  Tickets for the night which is always a great occasion can be obtained from John Glennon 087 2715 804 and are priced at €30 each.

There was no winner of the Rhode GAA Lotto for the week ending 5th of January for a Jackpot of €15,000.  The numbers drawn were 14 15 26 27   The club would like to thank all those who supported the draw and thanks to Killeen’s for the use of their premises and for their help and cooperation.  The following matched three numbers and received €50 each.  Next week’s draw takes place in Doyle’s

Clubs have the opportunity to ease their burden of the levy which clubs have to pay for the refurbishment of O’Connor Park which is now recognised as one of the small stadiums in the county.  The Rhode Club levy is €3,500.  To ease the burden the county board with the approval of all clubs the following scheme is now in place.

Get well wishes to all the people of the parish who are ill or hospitalised at the moment especially to Liam Swaine, Brendan O’Toole, Paddy Quinn, Mick Kerrigan, Clare Quinn they are all wished a speedy recovery.