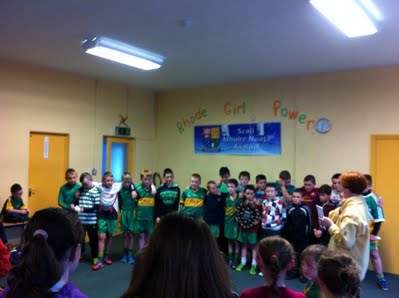 Rhode Senior footballers collected their 5th brace of points in this year’s league when recorded a 3-13 to 0-10 win over Raheen in Rhode on Tuesday evening last.

Rhode Under 14 footballers won their first game in this year’s championship when they recorded a huge 9-7 to 6-12 win over St Vincent’s in Kilclonfert on Thursday in what was a good game of football.

Under 14 League Rhode v Edenderry in Rhode on Friday 29th at 7.30pm

The best of luck to the Rhode Schools Ladies team who play in the finals on Wednesday May 20th in O’Connor Park.  The best of luck also to their teachers and team trainers Deirdre Foy and Paddy Guilfoyle lads, also it shows the great work being done by all the schools in the promotion of our native games.

Hard luck to the Offaly Senior football team and management team who were defeated by Longford in the first round of the Leinster Senior football championship on Saturday evening in O’Connor Park.  It was a disappointing result as Offaly had beaten Longford comprehensively in the Division 4 league final three weeks ago and there was a good Offaly following at the game.  Offaly now go into the qualifiers draw in a few week’s time to determine who they will play next.  On the team and panel from the club were Brian Darby, Niall Darby, Niall McNamee, Anton Sullivan, Conor McNamee, Ken Garry, Paul McPadden, Eoin Rigney and James McPadden.

The Rhode Club would like to thank all those who purchased tickets and attended the Club Faithful function in the Tullamore GAA Centre prior to the game on Saturday evening.  It was a very enjoyable and well organised function thoroughly enjoyed by all who attended a credit to the organising committee sponsored by P.J Rickard.

There was no winner of the Rhode GAA Lotto for the week ending 11th of May for a Jackpot of €15,000.  The numbers drawn were 9 13 17 30.  The club would like to thank all those who supported the draw and thanks to Killeen’s for the use of their premises and for their help and cooperation.  The following matched three numbers and received €200.  The lotto this week will take place in Doyle’s

All the best to boys and girls of Rhode, Ballybryan and Croghan who are receiving their holy communion this month.  Croghan and Ballybryan have received theirs while the Rhode children will get theirs on Saturday.

Sympathy is extended to the Brady family of Edenderry on the sudden and untimely death of Mickey former Offaly and Edenderry football player who was laid to rest in Edenderry cemetery on Wednesday last.  Sympathy is also extended to the Groome family of Garr Rhode on the death of Paddy who passed away on Wednesday last and whose remains were interred to Castlejordan cemetery on Friday.  Also to the family of Tom Furlong of Tullamore former Tullamore and Offaly great and New York and Offaly in U.S.A who passed away last week in America.  May they all Rest In Peace.

A Very Happy Christmas To One & All Enjoy & Stay Safe

Big Reunion For The 2011 Champions