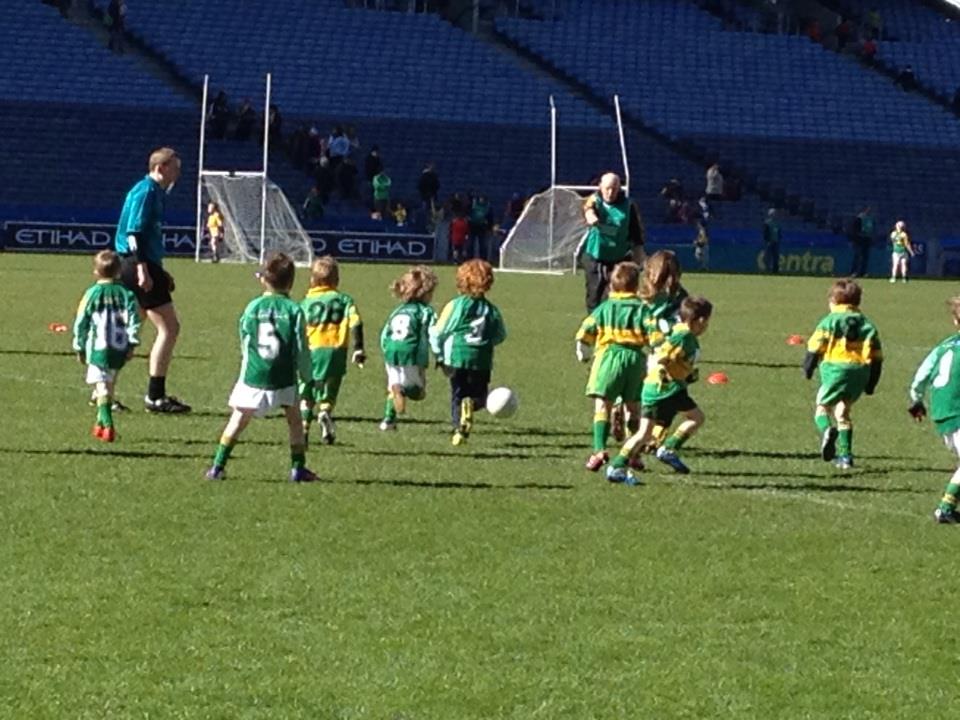 On Friday  night last  Proud parents and supporters alike  packed Rhode GAA Hall to the sound of the Offaly rover  to witness the Boys and Girls  of Scoil Mhuire Naofa An Rod receive their respective Cumann Na Bun Scoil championship Medals which they historically won on the same day. As one entered the hall it was very hard not to miss the wonderful display of the bunting and flags as well as the wonderful slide show of photographs the great victories and the Trophies side by side on a Green and gold draped table.

MC for the Evening  Rod Og Minor Chairman Cathal Smith who spoke on behalf of the club opened proceedings by welcoming all to the evenings presentation and went on to thank many club members and volunteers for the massive support and commitment that made it possible for these wonderful victories especially those of the teachers and parents. Cathal Commended both the girls and boys and many of them are making big gains in their own right in the club scene and he wished them much success  before ending his few words he mentioned that  a Kinder garden Programme for both boys and girls aged 4-6 will be starting shortly to continue growing our under age.

Principal Mary Bray spoke of her delight to see  such a big turnout and commended those who had the hall looking so well Mary is hoping that we will be celebrating a double  victory again and praised the Teachers Deirde fay and Paddy Guilfoyle and their team of volunteers for giving such commitment to both teams. Mary gave special praise to the club who have been hugely supportive with sponsoring buses and other such help with developing football within the school.

It was now the turn of the Team captains Aoife Moore and Harry Jones to s in which they gave great praise to their team mates and expressed how much they would cherish this moment both finshed by thanking their mentors.

The Special Guests on the Night who made the presentation to the victorious boys and girls were Rhode Senior Members Glen O’Connell, CIaran Heavey and Rhode Ladies Player Niamh Malone.

Deirde Fay and Paddy Guilfoyle got the presentation under way by calling out their repective team members one by one the young lads received their medals from Glen and Ciaran while the girls recieved their medals from Niamh witch was met with massive applause by all those in attendance. Both Mentors expressed their delight by praising their teams. As the special guests were all past students of Rhode National school they expressed their delight with the schools footballing achievements.

It was then back to Cathal to finish up the evenings proceedings by thanking all those in attendance and inviting them next door for a cup of tea and light refreshments.

Rhode GAA would again like to Congradulate Rhode School on their massive achievements and wish them the very best in the future great Praise should go to Deirdre Fay and Paddy Guilfoyle for their hard work and commitment as well as the many volunteers and parents who made the evening such a success. Thank you also to those who represented the club on the night.

Rhode Under 14 footballers gained their third win in this year’s championship when they recorded a 5-12 to 2-7 win over St. Rynagh’s in Banagher on Monday of last week.

Rhode Senior footballers played Portlaoise at the opening of their new state of the art pitch on Sunday and after a very good game of football Portlaoise won on a 3-11 to 0-13 score line.  At the half-time interval the score was 1-7 to 0-10.  Rhode were short their county players 8 players in all and Portlaoise were also short their county players.  It was an enjoyable game however which both teams will benefit greatly from when the local senior championship recommences.  The club would like to thank most sincerely Portlaoise for the invitation to play them on their great day.  Portlaoise senior hurlers also played a match.  The Club would like to thank the Portlaoise Club and officials for their wonderful hospitality to the Rhode team and officials, a special thanks is expressed to Pat Leogue of the Portlaoise Club for everything.

Rhode GAA Club hosted an Under 8 blitz on Saturday morning consisting of teams from Rhode, St. Broughan’s, Na Fianna and Clara and a very enjoyable day of football was enjoyed with top class entertainment provided by the young players.  All teams fielded two teams so it meant that all players got great play time.  Thanks to all the teams for participating, all the team managements, referees and officials.  Thanks is also expressed to the Rhode Minor Club who hosted and made the whole day very efficiently and thanks also to all who had the field and the dressing rooms in such great order.

The best of luck to the Offaly Senior footballers team and management team who play Waterford in the first round of the qualified on Saturday at 2pm in Dungarvan.

There was no winner of the Rhode GAA Lotto Draw that took place on the 8th of June for a Jackpot of €15,000.  The numbers drawn were 5 7 8 25.  The club would like to thank all those who supported the draw and thanks to O’Toole’s for the use of their premises and for their help and cooperation.  The following matched three numbers and received €70 each.  The draw this week takes place in Killeen’s.