Rhode One hour away from Reaching Senior Final 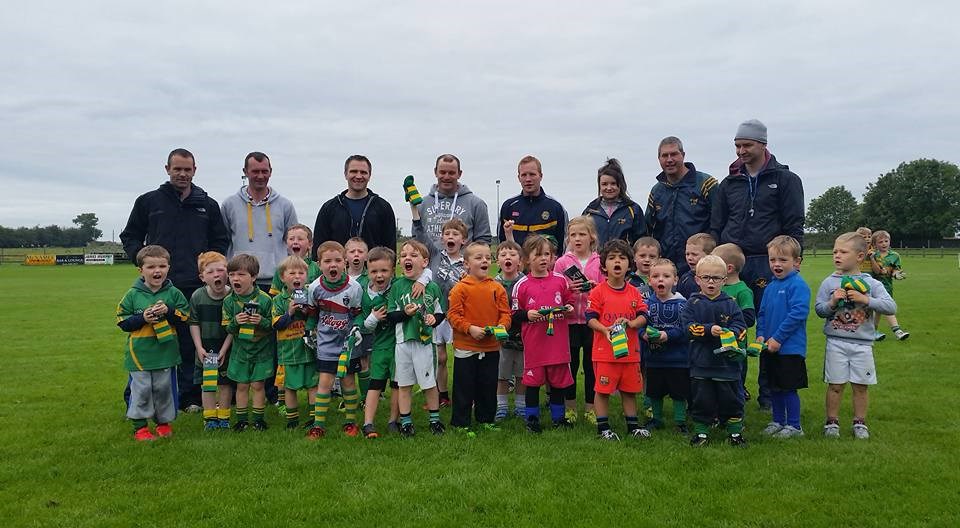 The best of luck to Rhode senior football team and management team of Pat Daly (Manager) , Alan Kellaghan and Sean Egan  who play Clara in the Senior County Semi -final on Sunday next in O’Connor Park Tullamore at 4.30

On Saturday morning last our Kinder-garden group Rhode Warriors were presented Twelves Rhode socks by the Rhode Minor Club for their great effort they have put in over the last year. Big thank you has to go to the parents and coaches for their hard work and effort without you it could not happen. Rhode warriors will continue to train every Saturday morning at 10 am.

Rhode played St. Vincent’s in the U,12 league  on Friday night last in Rhode which was a great display of football throughout the game by both teams.

Big thank you to U,12 Manager Stephen Darby for the continuous great work he is doing with the lads. Thanks also to Pauric Murphy who did a fine job refereeing the game.

Please Note that training will no longer continue on Wednesday evenings as the schools football is now back.  All Underage training for Rhode warriors, Under 8,10 and 12,s will continue at 10 am every Saturday morning Only.

Hard Luck to our U,16 boys who were beaten by St. Broughans in the U,16 Quarter -final in Gracefield Monday night last.

A big thank you to both the players and management for the huge work they have put in over the year .

Rhode hosted the U,14 B semi-final on Friday night last  and after an exciting game of football Gracefield emerged victorious  on a scoreline of 2-7  to 0-12 a one point victory over St. Broughans.   Thanks to the club officials who looked after the teams on arrival and were on hand throughout the game. Fergal  Smyth of Kilclonfert did a very good job refereeing.

Club members made the annual collection for  Irish Epilepsy on Sunday gone and the amount raised €200.01 . Thanks to all for their generous contribution .

There was no winner of the Rhode GAA Lotto Draw that took place on the 14th of September for a Jackpot of €15,000.  The numbers drawn were 2 15 16 24.  The club would like to thank all those who supported the draw and thanks to Killeen’s for the use of their premises and for their help and cooperation.  The following matched three numbers and received €50 each

The Rhode GAA Lotto is the main source of income the club has and now you can play online though our website.  The good news is when you play the lotto online you are entitled to free draws, for example pay for seven draws receive the eighth one free, pay for fourteen draws receive two free and so on.  In other words, the more you play the more free draws you are entitled to!! This weeks Lotto draw takes place in Doyle’s.

Get well wishes are extended to all the people of the parish  who are ill or hospitalised at the moment  especially to former Rhode player and former chairman Liam Swaine.

PrevPreviousPresentation of Under 14 Jerseys
NextA Very Happy Christmas To All !!Next