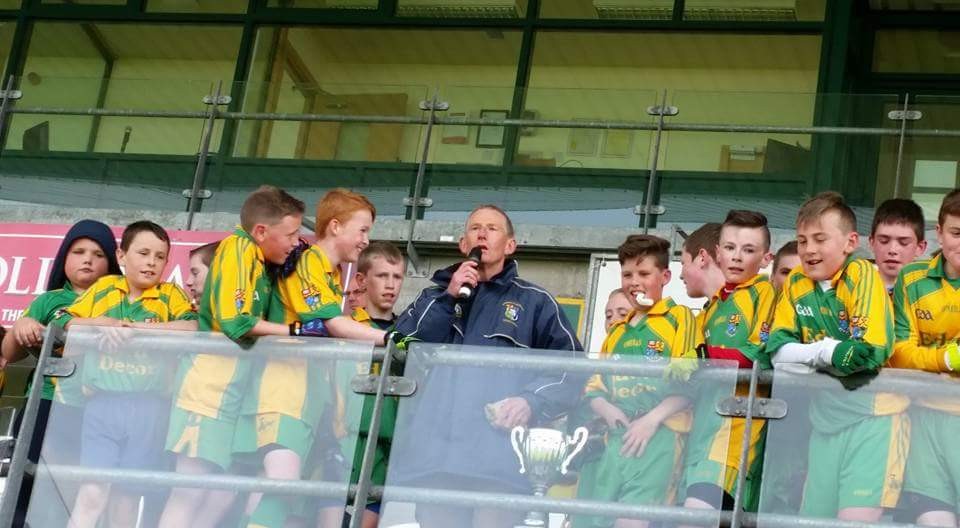 It was certainly a red letter day on Wednesday evening last for all at Rhode National School when the boys and girls form the school recorded a fine double, with the boys defeated Bracknagh in the final on a 1-11 to 0-7 scoreline and the girls defeated Tubber on a 4-06 to 3-4 scoreline. air max noir All credit must go to all concerned especially the teachers Deirdre Foy and Paddy Gulfoyle and the large number of people who supported the girls and boys each Saturday morning, the teachers spearheaded by Stephen Darby after school hours in the evenings. There were great scenes of jubilation when the cups were presented to both Captains Aoife Moore and Harry Jones. There was great support from Rhode for both teams and this gave great vocal support for the teams. All at the Club send congratulations t0 all concerned and those victories set seeds for the coming generation of players to the Club so well done to all. air max 90 blu donna

The following were the panel of players for both teams; Ladies; Breena Hand, Leah Coughlan, Sophie Hynes,Kaitlin Quinn, A Clarke, Aoife Moore (Capt), Sarah Scally, Sarah McCarthy, A Brennan, C Smith, J Heffernan, Laureen Ennis Cooney, Sarah Murphy, Aishling Glennon, Emily McDermott, M Flynn, Ciara Ennis, Maya Ennis, Robyn Garry, Jane Jones, Aishling McAulife, Abbie Dowling, Alanna Lenighan, Emma Gill, Aishling Calvey, Jane Spollen, Ally Hynes, Holly Leavey, Keelynn Glennon, Keeylan Dudley, Roisin McGovern, Tara Curley, Chloe Glennon. nike requin tn pas cher Team Manager; Deirde Foy. Boys; Mark Hagney, Adam Glynn, Harry Jones, Cian Murphy, J Heffernan, S Dunne, Philip Culhety, Lule Spollen, C Taylor, Owen Dalton, S Murphy, Michael Curtis, Jack Murphy, Dylan Kilmurray, Dylan Groome Lynch, Gary Kerrigan, Gerry Quinn, Stevie Kane, Eoin Smyth, Michael Culhety, Evan Farrelly. Team Manage; Paddy Gulfoyle. Junior B Championship. Rhode 1-12 Gracefield 1-10. Rhode Junior B footballers gained their 5th point in this year’s Junior B championship with a 2 point win over Gracefield in Rhode on Sunday morning last, the game was refereed by Pauric Gallagher Ballinagar.               Rhode Under 16 footballers gained their first brace of points in this year’s championship when they recorded a fully deserved 5-10 to 3-6 win over Shamrocks on Monday evening last. This was a well contested game of football. Vêtements Adidas Pas Cher Pas Cher     Rhode Minor footballers were well beaten by St. Womens Air Jordan 5 Vincent’s in the first round of the Offaly Minor football championship on Wednesday last in Rhode they were defeated by St. Maglie Portland Trail Blazers Vincent’s on a 3-13 to 1-6 score line.       The best of luck to the Offaly Under 21 hurling team who play Westmeath in the first round of the Leinster championship on Wednesday in Mullingar at 7.30pm. scarpe nike uomo in offerta         There was no winner of the Rhode GAA Lotto Draw that took place on the 18th of May for a Jackpot of €15,000. The numbers drawn were 12 17 19 20. The club would like to thank all those who supported the draw and thanks to Doyle’s for the use of their premises and for their help and cooperation. The following matched three numbers and received €50 each. Nike KD Shoes The lotto this week is in Killeen’s. Tracey Kelleghen, Clonin Rhode L Donegan, c/o Martin Mulligan Conor Leavey, Marian Tce Rhode Noel Glennon, Torean Fahy Rhode The Rhode GAA Lotto is the main source of income the club has and now you can play online though our website. The good news is when you play the lotto online you are entitled to free draws, for example pay for seven draws receive the eighth one free, pay for fourteen draws receive two free and so on. New Balance 577 damskie In other words, the more you play the more free draws you are entitled to!!       Sympathy is extended to the Family of Frank Dearlove who passed away on Sunday last and was laid to rest in Croghan Cemetery on Tuesday last. May he rest in peace.