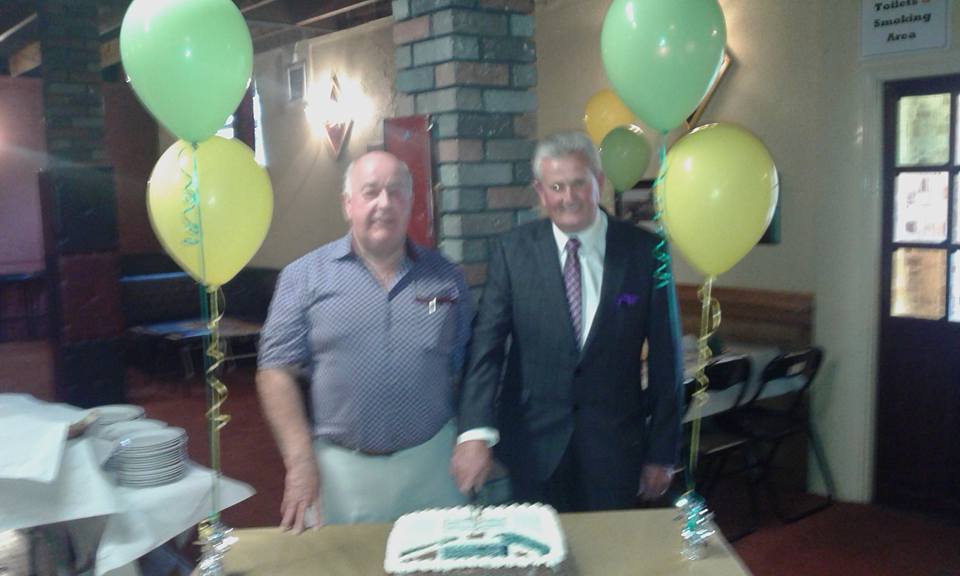 The 129th Club Agm took place Last on Monday  night with over 35 members in Attendance.  Chairman Joe Malone opened the meeting by welcoming all in attendance. Fr,Greg opened with a payer  which included  all  members  especially those who died during the year.  The minutes of last years  were read out and then the Club Constitution  was passed it was down to the various reports where Secretary , Treasurer ,  Chairman and Minor Chairman gave excellent and detailed reports on the year gone.

In his first Chairman’s Address Joe Malone Highlighted many  notable achievements  of the past year especially   our Senior Footballers making history in collecting our 28th  Offaly Senior Football Championship putting us at the top of the pile in Offaly.

First Election of the night was the Position of Club President in which The Legendary Iron Man Paddy McCormack was elected.

Speaking afterwards Paddy said he was truly honoured and proud to be president of this great club and paid tribute to the Late Christy Darby who was club President up-to his death earlier this year.

A Brief discussion took place where questions were put to the top table and dealt with.

Chairman Joe Malone Closed the meeting and wished everyone a happy Christmas and New year.

Massive Congratulations to our own Brian Darby on been named 2017 Offaly Senior Footballer of the year   The Offaly GAA Awards night will take place  on  Friday January 12th 2018 in the Bridge House Hotel Tullamore.

Congratulations is also extended to Fahy handballer  David Hope who collects  his fourth   Offaly handballer of the year award. It was a dream year for David winning Leinster and All Ireland Single and Doubles titles.

As Always The Bridge House Offaly GAA Awards promises to be a great night  those wishing to obtain tickets can do so by contacting John Glennon 087 2715 804.

Operation Transformation is coming to Rhode GAA supported by Diabetes Ireland, RTE and Get Ireland Walking . We will work injunction with the TV programme and hopefully if we are successful we might even get to feature on the it. We will have an action packed 6 wk plan including Health Checks , Guided walks Food demos , Workshops and Exercise activities .  Anyone wishing to sign up or seeking more information please contact Tracey Murphy 0872264435  or Joe Malone 0860553879 .

This is open to all know matter where you are from. Watch out for more details in coming weeks.

LET’S GETS THIS VILLAGE HEALTHIER BOTH IN MIND , BODY AND SPIRIT

A charity football match in aide of   Suicide Prevention Awareness will take place on St Stephen’s Day in Fr Dowling Park at 2 o’clock.

The Football match  be kicking off at 2 o’clock and there will be a donation bucket on the gate.

On the same night the fun and games will continue in O’Toole’s Lounge with music and a large auction on the night starting at 9 o’clock.
This is for a very worthy cause and all support will be greatly appreciated.
In the next couple of weeks we will be posting a list of items that will be up for auction.
Pool Tournament  & Texas holdem
A pool tournament and Texas holdem will take place in Kileens Lounge on the 29th of December starting at 5pm. All monies raised  are badly needed and will go to the Rhode Youth Club . 32 entries are needed in the pool tournament . To enter please contact Colm Killeen.
A good night is promised.
Lotto
There was no winner of the Rhode GAA Lotto Draw that took place on the 11th of December for a Jackpot of €15,000. The numbers drawn were 2 9 22 29. The club would like to thank all those who supported the draw and thanks to Killeen’s for the use of their premises and for their help and cooperation. The following matched three numbers and received €200.
Tristan, Dylan and Callum McDermott
Please Note that next weeks lotto draw will take place on Wednesday 27th December.
The Rhode GAA Lotto is the main source of income the club has and now you can play online through our website. The good news is when you play the lotto online you are entitled to free draws, for example, pay for seven draws, receive the eighth one free, pay for fourteen draws receive two free and so on. In other words, the more you play the more free draws you are entitled to!!
Get well:

Rhode GAA would like to thank all our Members and Supporters for supporting the club throughout  2017 and we wish you and yours and very happy and holy  Christmas and wonderful 2018 !!
PrevPreviousChristmas Lotto Draw
NextRhode GAA Christmas Raffle ResultsNext