A Mighty Weekend With The St.Patrick’s Day Parade & Daithi’s All Ireland Win !! 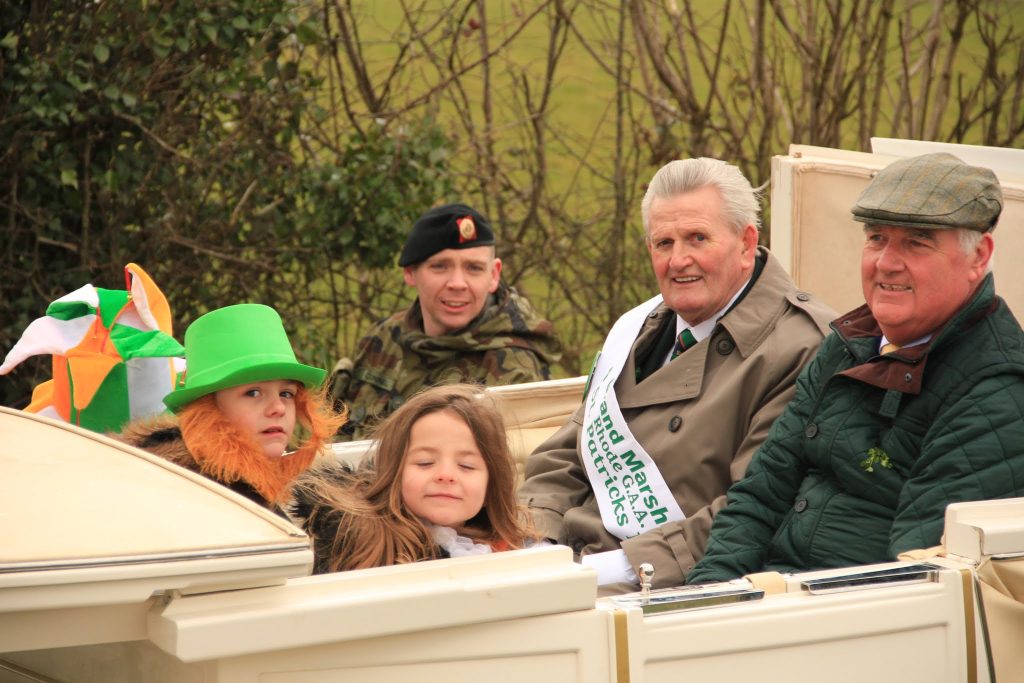 Saturday’s St.Patrick’s Day Parade I dont think will be forgotten for a few month’s to come as the Parish came together to make many magical memories for the little village. This  our second ever Parade for Patrick’s Day  show’s us no matter how small an area your from nothing is impossible. From 9am Saturday morning the football field was awash with with floats, people and the finest fleet’s of cars, machinery and Trucks that I can every imagine seen in the area. The Wonderful feeling just before the parade kicked off with every one in good humour gave it the added buzz. . Leading the Parade the mighty St.Patrick  throughout his blessing like there was no tomorrow and Patrick had a Lovely Motor-bike on stand by if he got tired on the route followed by the Grand Marshall The one and only Paddy McCormack ” The Iron Man From Rhode” who was travelling in style in what can only be described as fascinating classy Horse Drawn Carriage fit for Royalty . Paddy was joined by the great John Beezy Glennon for the journey and the carriage was flanked on each side by Rhode’s Best Men Serving in The Irish Defence Force’s . Over 40 floats’s, organisations , clubs, schools, car’s, tractors. trucks etc flowed down to the village with all putting in a massive effort with float’s done up spectacularly full of colour and vibrancy.  One by One they flowed into the village and each stood at the main stand as their name was proudly called out for the massive crowd in attendance to here. The Roaring, the cheering and the celebrating been done throughout the parade by all  was like been at a match.

There are to many to mention  but you all know who you are many thanks for  entering a float and taking part in our Parade and those who decorated their houses along the route. We have wonderful group’s , organisation;s businesses, people who made this parade very special. Well Done to you all.

In The Village Sandra Hynes and Rhode comhaltas entertained the massive crowd in attendance. A big thank you to Sandra and Comhaltas . As always Jody Gunning was magnificent as Master of Ceremonies.

To An  Garda Síochána and our stewards who kept the traffic flowing and everyone safe a big thank you for your hard work..

A massive Thank you to Derek Delaney Oak Wood Stud Greenhills Rhode for sponsoring the lovely Horse Drawn Carriage for the Grand Marshall . John Fitzgerald and his good wife for providng the Tri-motor bike, Colm and Cathriona Killeen for the warming refreshment’s . Offaly County Council & John Reilly for the road signs and Francie McGuinness  Fast Way Couriers Edenderry for the use of his Trailer which was our main stand.

To the local press especially the Offaly Topic for Sending great photographer Joan OBrien who captured many wonderful photo’s and also Local man Eugene McDermott who was on hand to capture the moments for Rhode GAA social media pages. A big Thank you to you both.

Finally A big thank you to all who sat on the committee over the last number of months you did trojan work and can be very proud.  I know they will not like this but Two men who over seen the committee and made everything come together deserve a mention Stephen Darby and Peter Kilmurray.

Massive Congratulations to Fahy Cross Handballer and one of our own Daithi Hope on winning the All Ireland Intermediate 40×20 Championship in Kingscourt Co. Cavan beating Cork’s Michael Hedigan.

Well Done on your Super Achievement we are all   proud !!

Offaly GAA  coaching and games are hosting a  2 day Easter camp for primary school boys and girls from ages 6-10 in Rhode GAA field Fr. Dowling Park on Thursday 5th and Friday 6th of April 10am to 2pm .

It a chance for the kids to further their footballing skills with the top Offaly coaches over their holiday term. Full cost for the two days in €20-00 and the children are required to bring a packed Lunch,drink, towel and change of gear

Rhode U’17s will take on Ballinamere/Durrow in the first round of the league on Thursday 22nd of Mark at 7:30 pm in Fr.Dowling Park Rhode.

There was no winner of the Rhode GAA Lotto Draw that took place on the 5th of March for a Jackpot of €15,000.  The numbers drawn were 3 21 22 26.  The club would like to thank all those who supported the draw and thanks to O’Toole’s for the use of their premises and for their help and cooperation.  The following matched three numbers and received €70 each.

Get well wishes are extended to all of the people of the parish who are ill or hospitalised at the moment especially Great Rhode Supporter Maggie Glennon .We hope your home soon Maggie.

Deepest Sympathy is extended to the Doyle, Evans and extended families on the passing Fionnuala Doyle Edenderry. The deceased would have taught many of our Rod Og players when she was teaching in Croghan National School. Fionnuala’s funeral mass took place on Tuesday 6th of March in St.Mary’s Church Edenderry followed by burial to St.Mary’s Cemetery.

May Fionnuala Rest In Peace