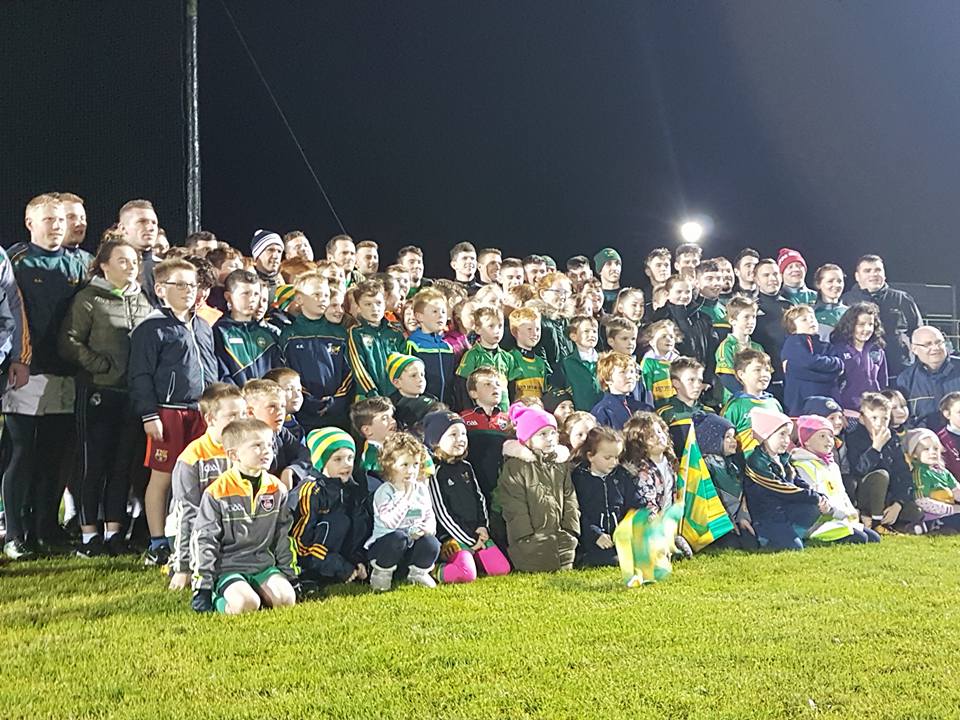 Rhode Senior Footballers got the first round of the championship off to winning ways on Sunday afternoon last with a 3-15 to 0-17 point win over Cappincur in Bracknagh.  Cappincur never gave Rhode a break throughout the game they led by one point at half-time Rhode 1-10 Cappincur 0-11. Rhode showed great composure and within a matter of minute’s took back control  of the game with a goal.  Cappincur kept kicking point’s but with a further goal from Rhode and some lovely point’s scored the final score read Rhode 3-15 to 0-17.

On a weekend where it was hard to get pitches in good order due to the weather conditions of previous weeks it would be unfair not to mention the great order  Bracknagh GAA Pitch was in for Sunday’s Game.

Rhode U,17’s had a great win over Shamrock’s On Friday evening last in Fr.Dowling Park with the score-line reading 2-13 to 1-10. Rhode were impressive from start to finish and at the Half  Rhode 2-05 Shamrock’s 0-5  up.

On Easter Monday Rhode U.13’s bet Summerhill of Meath in the Leinster League Quarter Final on a score-line of 4-09 to 3-08. Rhode Now Play Skyrne in the Semi Final Monday (9TH April)

On Friday evening last Rhode U,13s  got the Offaly league off to a winning start over neighbors Edenderry defeating them on a score-line of 3-11 to 1-09 .

On Easter Monday Rhode U,15’s had an impressive win over Shamrock’s in Mucklagh defeating them on a score-line of 6-09 to 2-04.

On Saturday evening last we held Clonbullogue V Daingean  in the Intermediate Championship . A big Thank you to all who stewarded the game or helped in any way whether it was parking cars, doing the gate, scoreboard  or supplying the refreshments.

Rhode Junior A Footballer’s will take on Birr in Fr.Dowling Park Rhode on Saturday April 21st at 6pm.

There was no winner of the Rhode GAA Lotto Draw that took place on the 3rd of April for a Jackpot of €15,000.  The numbers drawn were 10 11 19 24.  The club would like to thank all those who supported the draw and thanks to O’Toole’s for the use of their premises and for their help and cooperation.  The following matched three numbers and received €0 each.

Get well wishes are extended to all of the people of the parish who are ill or hospitalised at the moment.especially John Beezy Glennon, Liam Swaine and Christoir Flynn .

Deepest Sympathy to the McNamee and Mooney Families Clonmore on the Passing of Margaret Maggie McNamee. Margaret’s Funeral Mass took place in CastleJordan on Tuesday followed by burial to the adjoining cemetery.