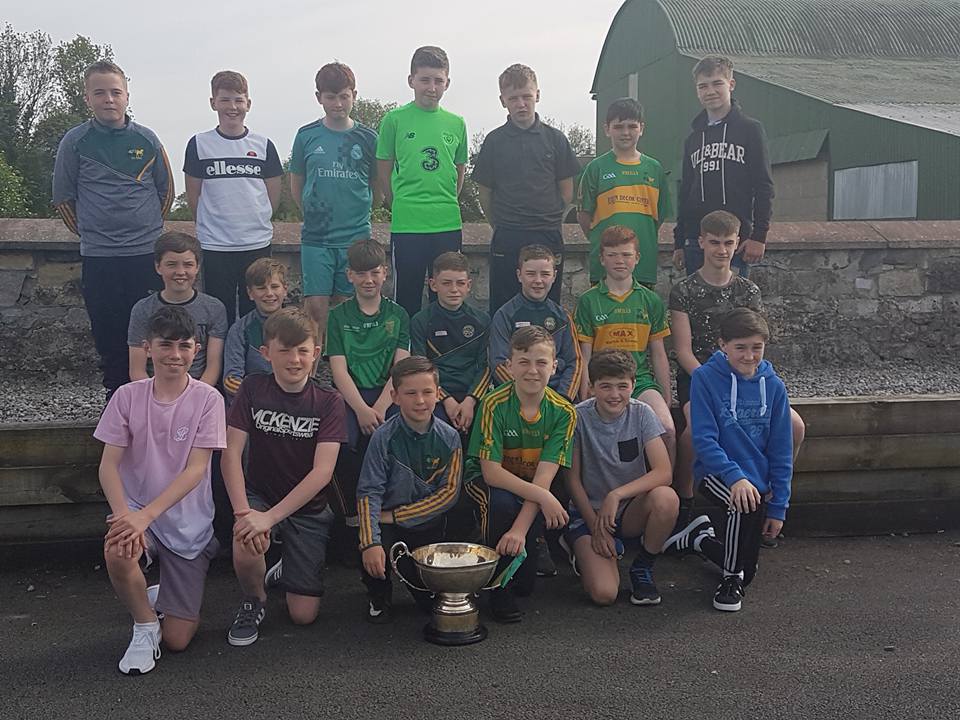 Rhode Senior Footballers will now take on Cappincur on Wednesday May 23rd instead of Tuesday 22nd at 8pm in Cappincur.

Rhode Junior B Footballers take on Tullamore on Friday May 25th at 8pm in O’Brien Park  Tullamore.

Rhode  take on Clodiagh Gaels on Sunday May 27th in Killeigh at 12 midday.

Rhode U.15 Footballer’s take on Clara in the U,15 League semi final on Sunday May 27th in  Mucklagh.

On Saturday afternoon a large number of family and supporters gathered  along side the U,13 footballers to celebrate their magnificent  win over Tullamore to be crowned Leinster League Football Champions. Minor Club Chairman and U.13 Manager Stephen Darby spoke highly of his team congratulation them on their wonderful achievement and reminding them if they continue  to work and hard and give 100% commitment they all have a wonderful future ahead of them and giving a special word of thanks to Seamus Cocoman, Michael Kennedy, Pauric Murphy, Craig Byrne and Jimmy Hannon. Rhode Senior Footballers Stephen Hannon and Ruairi McNamee were on hand to present the team with their medals. A wonderful day was had as the u,13s were treated to some pizza and chips from Jimmy’s Chipper. There were many other lovely treats and refreshments for all who attended.  . It was a wonderful evening enjoyed by all and I would imagine the young lads wont forget it  for a while.

A massive thank you to Minor Secretary Tracey Murphy , Regina Swaine and Mary Dunne  for their work on the day.

A big thank you to the Offaly Topic and Tullamore Tribune Photographer’s for attending and their continuous coverage.

Rhode U,13s were due to play Championship on Friday evening last but no referee showed up at the grounds so Rhode played Shamrocks in a challenge game.

Rhode GAA Minor Club are hosting their second family fun run/walk but this year half of the monies raised will go to Rhode & Croghan Lourdes Fund who every year send sick parishioners to Lourdes’s.

We Hope That you can spread the word to those who may want to take part on the day .

The 5k Family Fun/run Walk will take place on Saturday the 2nd of June all are urged to be present at 9:30 at Rhode GAA Grounds with Run/walk starting at 10am followed by refreshments.

Please Note their is no registration fee for the event but their will be a donation box and our under-age members have gotten sponsorship cards to fundraise for both their club and Rhode & Croghan Lourde’s Fund.

Rhode & Croghan Lourdes Committee was founded over 40 year’s ago  with the aim to raise funds in aide of sending member’s of our community to Lourdes. Unfortunately many families have been touched by illness and as a result many have benefited from this fund . The Committee members are 100% Volunteer’s . We rely on the generosity of the community to help fund the yearly trip to lourdes  which have been wholeheartedly enjoyed by all who travelled. This Year along with our Annual fun bike ride we are joining with Rhode GAA under-age in a Walk/run on the 2nd of June .We Would Welcome all to come out and take part in either or both events. As Always we appreciate the generosity of our community to continue this fundraiisng efforts.

Rhode u,9 footballers travelled to Edenderry on Saturday to take part in a Go games blitz where they played Edenderry and Ballinamere/Durrow. All teams give an excellent of their footballing skills.  The u.9 team  want to congratulate their team mates who couldn’t be with them at the blitz as they were receiving their first holy communion in Croghan.

It has been a difficult week for Offaly Football but hopefully we can all move forward together and the swift appointment of the Interim management team is a massive help. Congratulations to Stephen Darby and Alan Mcnamee on been appointed Selectors of the Offaly Senior team along side Tullamore brothers  John Rouse (selector) and Paul Rouse (Manager)  who have great Rhode connections with their Grandfather being the Legendary  Dick Boiler Conroy. Both Stephen and Super have never been found wanting on the playing fields for both club and county and no doubt will be a great addition to the setup to get Offaly moving forward.

There was no winner of the Rhode GAA Lotto Draw that took place on the 14th of May for a Jackpot of €15,000.  The numbers drawn were 6 7 8 9.  The club would like to thank all those who supported the draw and thanks to O’Toole’s for the use of their premises and for their help and cooperation.  The following matched three numbers and received €100 each.
Stephen Darby
Adrian Molloy
The Rhode GAA Lotto is the main source of income the club has and now you can play online through our website.  The good news is when you play the lotto online you are entitled to free draws, for example, pay for seven draws, receive the eighth one free, pay for fourteen draws receive two free and so on.  In other words, the more you play the more free draws you are entitled to!!

Sympathy
Deepest Sympathy is extended to the McEvoy Family Daingean on the passing of Margo  whose funeral mass took place on Wednesday morning last at Mary Mother of God Church Daingean followed by burial to St.Mary’s Cemetery. The deceased was a sister of  Ber Malone Rhode.
Sympathy is also extended to McCabe Family Knockdrin on the passing  of Joe who passed away on Tuesday May 8th the funeral mass took place in CastleJordan on Thursday May 10th followed by burial to the adjoining cemetery .
May Margo & Joe Rest In Peace
PrevPreviousLotto Results
NextClub LottoNext