Rhode Take On Cappincur In Division 1 League Final This Weekend 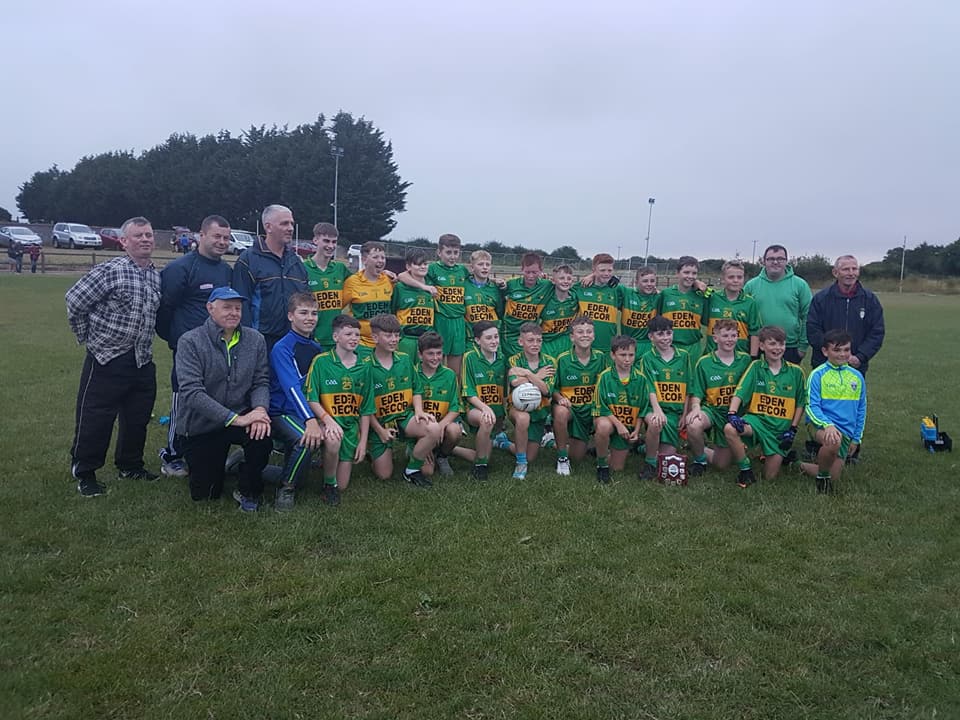 Rhode Senior Footballers played out a 2-08 to 0-14 Draw against Ferbane in Bord Na Mona O’Connor Park on Sunday afternoon last. Rhode seniors were down by 4 points at the half but Rhode never gave up and continued to draw themselves back into the game and in the dying minutes  Rhode were a point up but with further injury time played and a free for Ferbane drew the game and final whistle was blew. Rhode Seniors continue their unbeaten run in the championship .

Rhode Senior Footballers take on Cappincur in the Division 1 League Final  this Saturday the 28th of July in Clonbullogue at 7:30pm

Rhode Junior A footballers secured their third win in the championship beating Clara on a score-line of 2-14 to 1-11.

Rhode Junior footballers lost out in qualifying for the latter stages of Junior B Championship following  6-06 to 2-09 defeat to Shamrocks in the final game of the group.  Well Done to players and management  for giving it there all. It is  always great to be able to put out  a third team.

On Friday evening last Rhode U,13 footballers traveled to Daingean to take on Na Fianna in the League Final. From the start of the game Rhode took the lead and never took the foot of the peddle throughout the game  which had us leading by 2-08 to 1-02 at the break. Rhode kept hitting home the scores and got their just rewards winning the League on a final score of 5-17 to 2-03.

A massive thank you has to go to the management team of Stephen Darby, Seamus Cocoman, Michael Kennedy, Pauric Murphy, Craig Byrne.

Rhode U,13s took on Tullamore in Championship on Monday evening last in Tullamore. Rhode were down by two points at half-time but never gave up and won the game on a score-line of 4-7 to 3-04 .

Rhode U,13 Footballer’s take on Shamrock’s  on Wednesday evening July 25th at 7:30 in Mucklagh.

Join Rhode GAA club in Commemorating the Centennial of Gaelic Sunday on Saturday August 4th ,  A hundred year ago in August 1918 Gaelic football teams played matches all over the country in defiance of the ruling British forces.  To replicate the game played against Edenderry in 1918 Rhode Senior footballers will be playing Edenderry in the Offaly Senior Championship at 6:00pm . Following the match we will be having a BBQ in Killeens @9pm with music by caz entry €10. Also on the night there will be a presentation to Rhode/Croghan Lourdes fund .

On The Saturday Morning Rhode under-age club will mark the historic occasion by playing a blitz involving our teams from Rhode Warriors up to our u’13s . The blitz will kick off at 11am . Refreshments on the day. All Welcome !!

Over 200 boy’s and girl’s took part in the cul camps in Fr.Dowling Park Rhode. It is an historic high for  attendance in the Rhode camp. The weather conditions Monday to Friday helped create a wonderful mood among participants  as they had a jam packed week full of fun where they gave an excellent display of their footballing skills throughout the week. Yet Again the Rhode Camp went international as we welcomed Sam Robertson (Saudi Arabia) Issabelle, Daniel and Maggie  Mae Leavy (New York USA)  Its always a delight to have them with us and hopefully we will see you next year.  On the final day the Club gave all the  kids in attendance   a goody bag.

A massive Thank you to the fabulous coaches who as always do a fantastic job throughout the week.

A big thank you also goes to Minor Club Secretary Tracey Murphy, , PRO Robert Kellaghan and Groundsman Paul McNamee  for their up keep on the field and dressing rooms and Parking for the summer camp and making sure everything ran smoothly for the coaches. Thanks also to Chairman Joe Malone, John Glennon and Mick Fleming for their help stewarding the parking and Traffic.

Massive Congratulations  to Rhode Junior Player Aidan Brereton and his wife Alison on the birth of their  baby daughter Roisin.

There was no winner of the Rhode GAA Lotto Draw that took place on the 16th of July for a Jackpot of €15,000.  The numbers drawn were 9 11 12 29.  The club would like to thank all those who supported the draw and thanks to Killeen’s for the use of their premises and for their help and cooperation.  The following matched three numbers and received €200.

Get well wishes are extended to all of the people of the parish who are ill or hospitalised at the moment especially Bridgie Kerrigan, Kathleen Swaine. Tadgh Murphy.