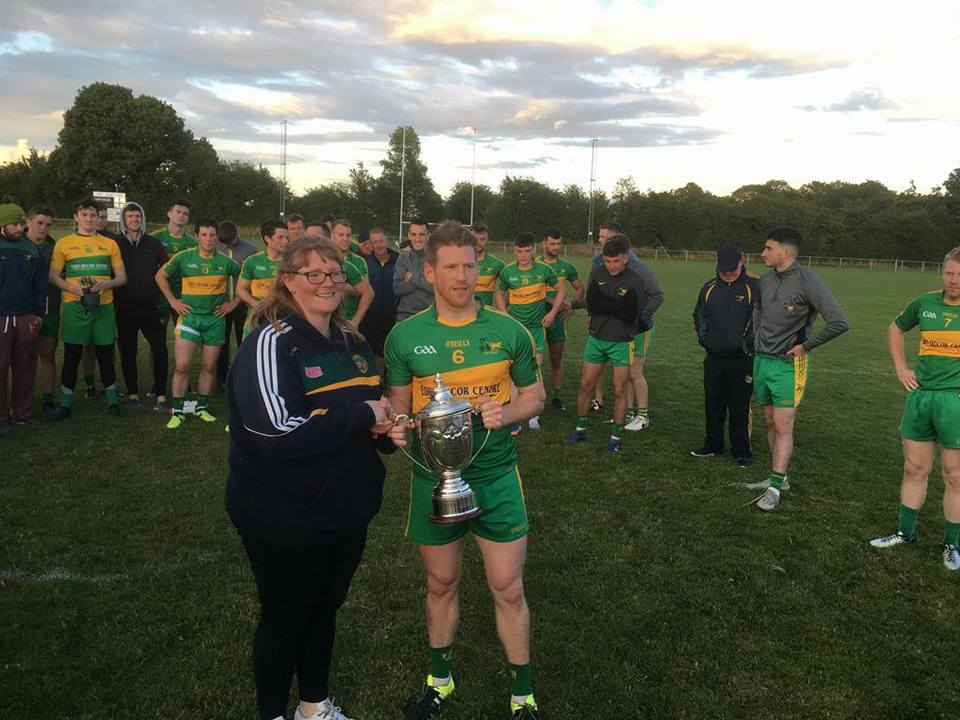 On Saturday evening last Rhode Senior footballers won their fourth league title in a row  when they defeated Cappincur in the Division 1 League Final on a score-line of 4-14 to 0-15 points in Clonbullogue .

Massive Congratulations to both players and management  on winning the Casey Cup which is named after Rhode and Offaly Legends Mick & Paddy Casey. 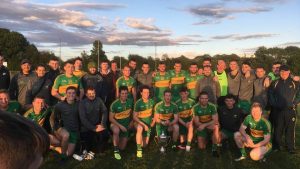 Join Rhode GAA club in Commemorating the Centennial of Gaelic Sunday on Saturday August 4th , A hundred year ago in August 1918 Gaelic football teams played matches all over the country in defiance of the ruling British forces. To replicate the game played against Edenderry in 1918 Rhode Senior footballers will be playing Edenderry in the Offaly Senior Championship at 6:30pm . Following the match we will be having a BBQ in Killeens @9pm with music by caz entry €10. Also on the night there will be a presentation to Rhode/Croghan Lourdes fund .

On The Saturday Morning of August 4th Rhode under-age club will mark the historic occasion where our under-age teams from Rhode Warriors to our U,13s will take part a blitz in Father Dowling Park Rhode kicking off at 11am . Club President Paddy McCormack Will Raise the Tri-Colour followed by the playing of the National Anthem Amhrán na bhFiann by Rhode Comhaltas.

Refreshments on the day. All Welcome !!

To Celebrate the occasion we are also hoping to put on display for ton Saturday August 4th GAA Memorabilia such as Medals, Jerseys , Trophies, Footballs , Match Programme’s from the years gone by . Anyone Wishing to Kindly Donate Items for the day or hep us out please contact Stephen Darby on 0868452132/ Robert Kellaghan 0876452964

August 4th 1918 was one of the most remarkable and significant days in the history of the GAA. It will be forever remembered as Gaelic Sunday- the day when the GAA peacefully stood against the British Empire – and won!

In 1918, the authorities in Ireland tried to impose conscription to supplement the war effort but there was massive opposition to this. There was great frustration on behalf of the British authorities at this and they blamed the GAA in part for this opposition. The issue came to a head on July 9th when an Ulster Championship match was prevented from taking place in Cootehill by Crown Forces.

British Authorities attempted a crackdown on GAA activities by insisting no matches could take place without prior written permission being sought and granted. The GAA not only objected they decided to defy the order and hold a match in every parish in Ireland at precisely the same time – 3pm on Sunday 4th August.

The protest was Far more successful than could ever have been imagined and an estimated 54,000 players participated in a game with over 100,000 watching across the entire island. It all ran entirely without major incident and Forced the abandonment of the requirement to seek a license to play a GAA match.

Rhode Senior Footballers travel to take on Edenderry at the opening of their new pitches the Rosderra-Weavers field at 6:30pm this Saturday August 4th . This will also mark a hundred years to the date that Rhode played Edenderry as part of Gaelic Sunday.

Rhode U,17 footballers will play the first round of the championship this coming Wednesday evening August 1st against Kilcormac/Killoiughey  at 7:30pm in Fr.Dowling Park Rhode.

Rhode U,13 footballers were defeated by Shamrock’s on Wednesday evening last in Mucklagh on a score-line of 2-15 to 1-05.

There was no winner of the Rhode GAA Lotto Draw that took place on the 23rd  of July for a Jackpot of €15,000.  The numbers drawn were 4 15 24 28.  The club would like to thank all those who supported the draw and thanks to Doyle’s for the use of their premises and for their help and cooperation.  The following matched three numbers and received €200.