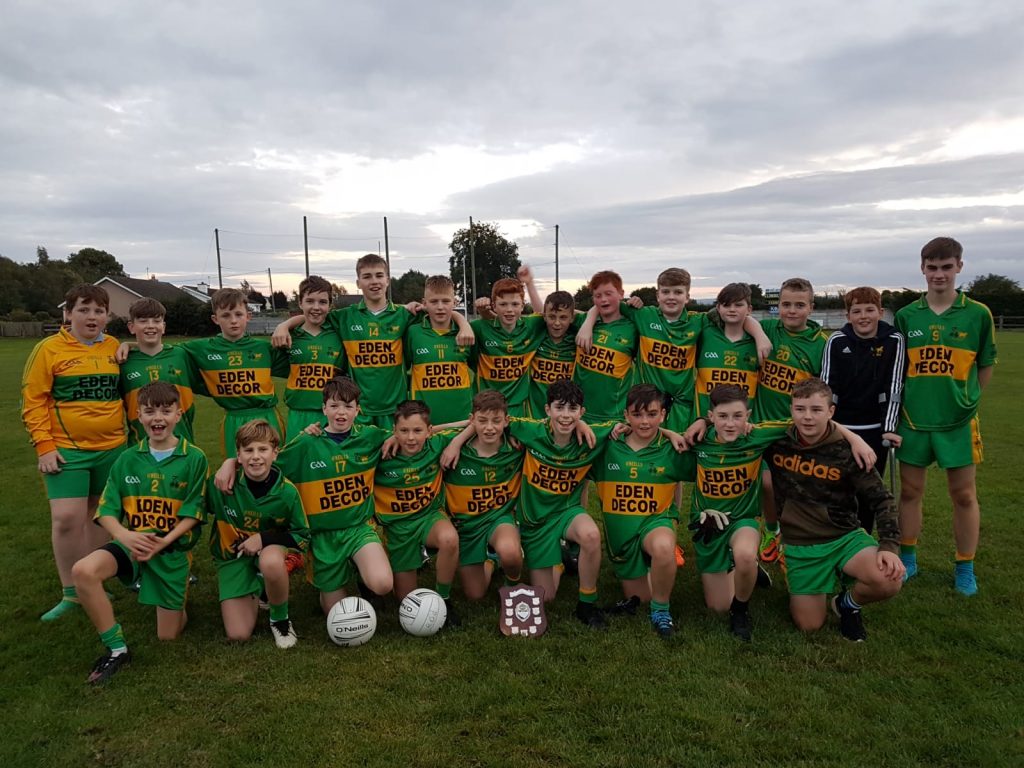 Offaly U’13 A Shield County Champions !!

Rhode U13 footballer’s took on Kilcormac-Killoughey in the U13 A shield championship final on Friday evening last in Cappincur where they defeated them on a scoreline of 2-06 to 1-06 to be crowned Offaly U’13 A Shield County Champions of 2018. Rhode led at the break 1-05 to 0-01. Kilcormac-Killoughey came back at them but Rhode Kept plugging away to bring home a championship title to Rhode.

The Championship Title win tops off a great year for Rhode U.13 team and management as they won an Offaly league title and a division 2 Leinster league Title.

Rhode U17 footballers defeated Clara on a scoreline of  1-16 to 2-08 to qualify for the quarter finals. It was a wonderful come back as Rhode were been beaten at half-time on a score-line of 0-07 to 2-06.

Thanks also to Bill Glennon for filling in as team secretary for u17 team management on Sunday morning.

U.8 All Ireland Blitz

Rhode U’8 Footballers travelled to NewBridge on Saturday morning last where they took part in Sarsfields GAA club All Ireland football blitz . Our little stars of the future gave a great display of their footballing skills throughout the day and most of all they had a very enjoyable day.

Rhode U,12 footballers travelled to Mullingar to take part in the Sean Dempsey Memorial Tournament jointly hosted by Mullingar Shamrocks and St.Lomans. Our boys had a very successful tournament to reach the shield final but were beaten by BallyBoden St. Enda’s of Dublin.    A great day was had by all.

Walking Track
All Wishing to use the new walking track at our grounds have to be members of Rhode GAA Club .

>Membership Rates are as Follows:

There was no winner of the Rhode GAA Lotto Draw that took place on the 10th of September for a Jackpot of €20,000.  The numbers drawn were 11 16 19 29.  The club would like to thank all those who supported the draw and thanks to Killeen’s for the use of their premises and for their help and cooperation.  The following matched three numbers and received €70 each.