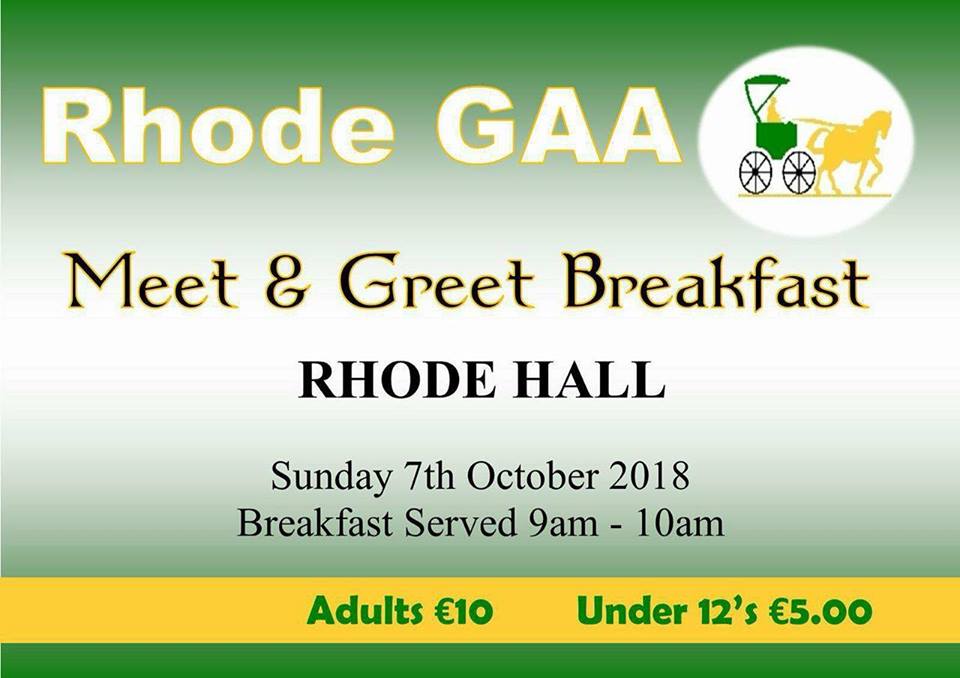 Rhode Senior footballers defeated Tullamore on a score-line of 2-09 to 1-10 to reach the Offaly Senior Football Championship Final. From the outset this was a tough battle but Rhodes true grit, determination and hard work meant that we came out on the winning side to see us back in the county final.

Join the Rhode Senior Footballers For a Meet and Greet Breakfast Morning in the Rhode GAA Parish Hall on Sunday October 7th with Full Irish Breakfast served between 9am & 10am .

Join Us to get in the mood for the County Final

Rhode Junior footballers were defeated by Clodiagh Gaels in the Junior A Semi final on Friday night last in Gracefield on a score-line of 2-07 to 0-10. Two early goals from Clodiagh Gaels was the difference in what was a great game of Football. Rhode played great football throughout but unfortunately it wasn’t to be and Rhode suffered their first defeat of the year.

Massive thanks to Declan Curley and his management team of Gordan Kerrigan, Sean Farrell , Bill Glennon and Stephen Murphy for all their hard work and commitment.

Rhode U17s were defeated by Tullamore in the quarter final of the u17 championship on Wednesday evening last in Gracefield the Final score read Rhode 0-08 Tullamore 4-07. While they are out of the championship our u17’s can hold there heads high in the way they performed throughout the year. Credit must go to the players most especially the management of Tom Coffey, Alan McNamee and John Killmurray .

Rhode U7 /U9 Footballers

Rhode U7 & U9 footballers enjoyed a great game of football on Friday evening last in St.Lomans GAA Grounds in Mullingar. A massive thank you to Aidan and his management team for arranging the excellent hospitality for our teams. Thanks also to former Rhode player Garrett Hickey for refereeing a number of games.

Rhode U 11 footballers traveled to Bord Na Mona Faithful fields on Saturday morning last where they played Ferbane/Belmont. Rhode gave a great display of football throughout.

Best wishes to our neighbor’s St. Brigids who play in the Intermediate County final on Saturday the 6th of October against Ferbane.

Massive Congratulations to the U14 Rhode Ladies Footballers who were crowned U’14 B  County Champions on Saturday last.

There was no winner of the Rhode GAA Lotto Draw that took place on the 24th of September for a Jackpot of €20,000.  The numbers drawn were 2 13 21 28.  The club would like to thank all those who supported the draw and thanks to Doyle’s for the use of their premises and for their help and cooperation.  The following matched three numbers and received €70 each.