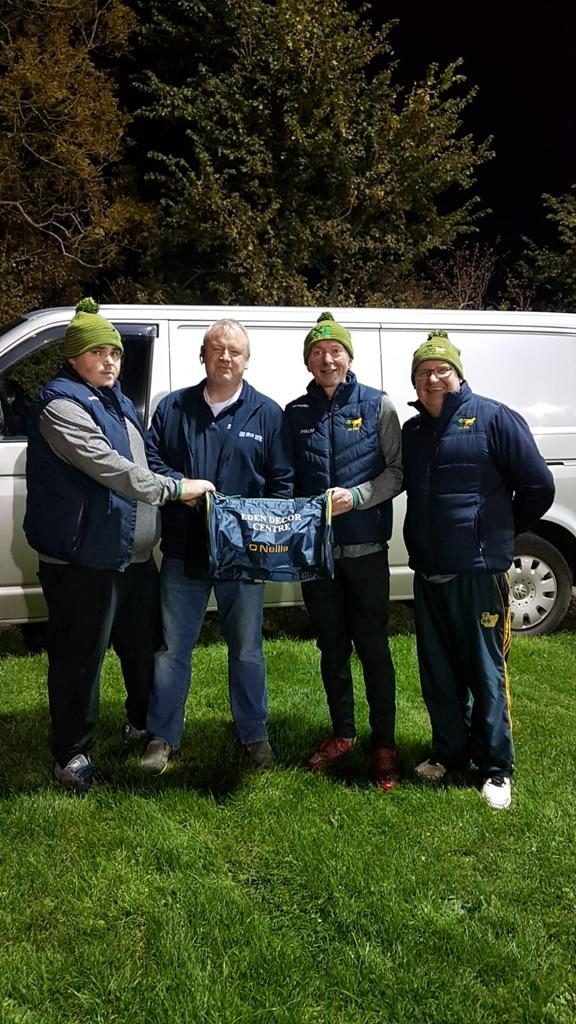 The 130th  Rhode GAA Club took place on Thursday night  last with over 35 members in Attendance.  Chairman Joe Malone opened the meeting by welcoming all in attendance. Fr,Greg opened with a payer  which included  all  members  especially those who died during the year.  The minutes of last years Agm were read out and then the Club Constitution  was passed it was down to the various reports where Secretary , Treasurer ,  Chairman and Minor Chairman gave excellent and detailed reports on the year gone.

In his 2nd and final address as Chairman Joe Malone  highlighted  many notable events and achievements for the club throughout the past year most especially our Senior team winning the championship for the 29th time and the 3rd year in a row and a 4th league title in a row.  Joe Spoke of what an honour it was to serve as Chairman of a great club.

Chairman Joe Malone said progress was been made and hopes to have them in place shortly.

Craig Byrne asked if the club  knew of any coaching courses coming up and he was informed that county board would  be notifying club in coming months.

On Behalf of the Club Executive PRO Robert Kellaghan thanked and praised Chairman Joe Malone ( 2 year), Secretary Ger Hynes (5 years) and Treasurer Patricia McManus  (6 years) for all their hard work throughout the years.

He went on to thank his fellow Assistant PRO’s Paul Hickey & John Glennon for their continuous hard work and assistance and the local press for their wonderful support in getting our message out.

Chairman Joe Malone Closed the meeting and wished everyone a happy Christmas and New year.

Join  Rod Og Minor Club  on St.Stephen’s Day for their Green & Gold Mile Charity walk around the Clubs walking Track in  Fr,Dowling Park from between 9:30am & 11:30am. All donations made on the day will go to the Rotunda Maternity Hospital. Join us to walk off the Christmas Dinner for a wonderful cause. Tea/Coffee and refreshments will be served.

All Cards to be back in to Shaz Hair Salon at 5pm on Friday December 21st. Draw cannot take place till ticket’s are in.

Please come along enjoy the live music and join in in the festive mood.

These bunch of lads made history in 2003 by beating a highly fancied Edenderry team on a score line of Rhode 1-13 Edenderry 1-10. The game was played on the 20th of September that year in Croghan on a glorious summers evening.

Edenderry went into the game unbeaten all year and were red hot favorites but the Rhode lads knew what they were made of and what it was going to mean for them and the parish to win this match. In one of the best games ever played by a Rhode team, Rhode came out victorious after a excellent game of football and the rest is history.
To remember these hero’s the reunion commitare organizing and fun filled night in O’Tooles Bar on December 28th starting at 8.00pm. On the night, the match itself will be shown thought-out the bar with music and lots of craic afterwards.
The reunion committee are planning on having a raffle on the night and all the money from that will go to a local charity.
More details to follow but please mark this one down in you calendar because this has the makings of a night to be remembered.

There was no winner of the Rhode GAA Lotto Draw that took place on the 10th of December for a Jackpot of €4,200.  The numbers drawn were 4 11 12 30.  The club would like to thank all those who supported the draw and thanks to O’Toole’s for the use of their premises and for their help and cooperation.  The following matched three numbers and received €70 each.

Christmas draw will take place next week in Doyle’s and there will be an extra €1,000 given out in prizes.

Please Note the Lotto draws for the next 2 weeks take place on Sunday December 23rd in Killeen’s ;Lounge & Sunday December 3oth in Otoole’s . Please have all books returned by 6pm each Sunday.

Rhode GAA would like to thank all our Members and Supporters for supporting the club throughout  2017 and we wish you and yours and very happy and holy  Christmas and wonderful 2018 !!