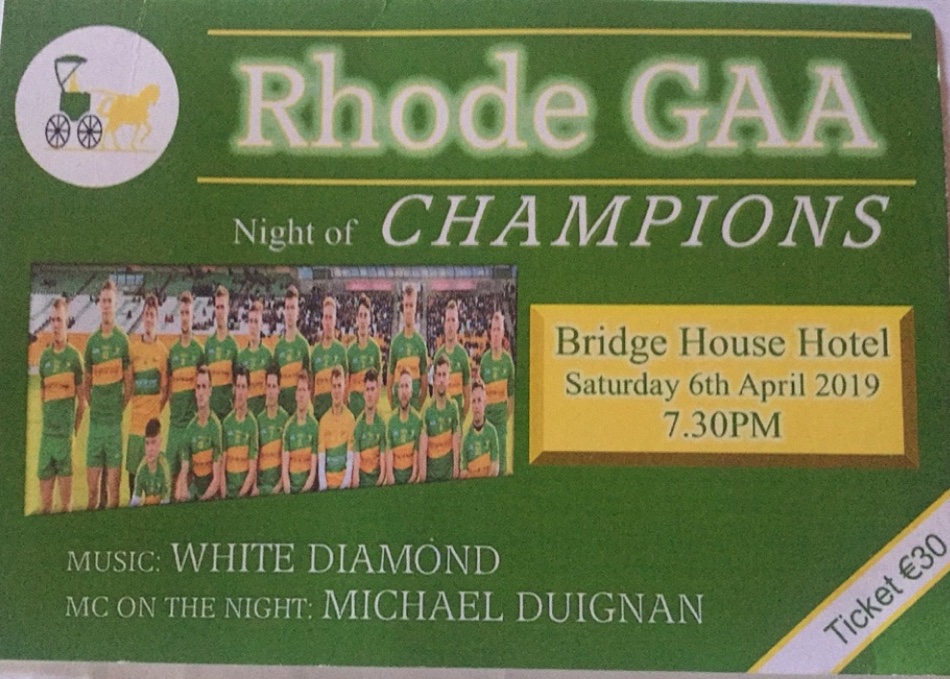 We are super delighted to Announce A Night of Champions on Saturday April 6th as we celebrate our Senior Footballers winning their 3rd championship and 4 league in a row our Junior footballers winning the division 4 league and to top it all off celebrate the massive achievements of Fahy handball duo David Hope & Noel Murphy . Special guests will be announced very soon. Tickets will be €30 and will be on sale this Thursday night March 7th  in killeens lounge 8pm to 9:30pm Doyle’s Lounge Monday 11th 8pm to 9-3opm and Thursday 14th March Killeen’s lounge 8pm to 9-30pm.   . Let’s come together to celebrate the great achievements of our two clubs

St.Michael U’20 footballer’s lost out to Clara on a score-line of 1-07 to 0-05 in what were woeful weather conditions on Sunday afternoon last. St. Michaels  were far the better team in the first half but were unfortunate not to be up by more at the break 0-5 to 0-4 . Clara got a point in second half to draw it and it was a draw for a good bit of the second half  but with the weather worsening the luck fell on Clara and they got a goal and further 2 points to reach the U’20 Semi Final.  Following a great win over Kilcormac/Killoughey in the first round it just wasn’t to be for the parish team who gave it everything.

Preparations are at an advanced Stage  for our  3rd Annual St. Patrick’s Parade which will take on St. Patrick’s Day The Parade this year will start at 10am from the power station road up to the village and all households along the Route are encouraged to decorate their homes with bunting and flags   . Last year’s parade was fantastic and this year’s is promising to be an even better one  and already we have over 30 floats and organizations taking part and we are also delighted to announce that our 2019 Grand Marshal is one of Rhode’s Finest  Pat Smullen  We are urging everyone to take part and This year will be cash prizes for the best float and for fancy dress so everyone make an effort  .Also on the day a bucket collection will be carried out in support of the U13 footballers  traveling to London A final  meeting  will take place  on Wednesday March 13th at 8pm in Rhode GAA hall and we urge all does plant to take part please attend. Anyone wishing to help out in anyway ie Stewarding please attend also.    All inquiries to Stephan Darby 086 8452132

We are delighted to announce a great new initiative for our club The Rhode GAA Supporters Draw:

Many Of our member’s would not be aware of the costs of insurance and affiliations which is over €1000 per team. We have 13 teams in the clubs. At the moment membership charges are very low in comparison to our neighboring clubs which are roughly around €100 per child player and up to €150  for and adult player. This year we have not changed our membership fee but we are asking that maybe you would consider taking part in  the following options below. As a club going forward we need to bring our facilities up to date. We need new dressing rooms to accommodate all our teams and ladies teams. This is in our 4 year plan for the club. In year 1, we hope to apply for planning permission for new dressing rooms. We need everyone’s support in bringing our club up to date with other clubs around us. This is a large project and will be a benefit to Rhode GAA and also the Community. Our success on the field is not reflected in our grounds. We need to work together to achieve our goals.

Be In with a Chance to win up to 30 cash prizes.

Entry into the 5 draws and a supporters car Sticker

The Rhode boys Under 13’s team traveled to Wolfe Tones of Kilberry, Co. Meath for their final group game in the Leinster Cross County League on Saturday 2nd March.

On a very wet and blustery day, Wolfe Tones won the toss and opted to play with the wind in the first half which put Rhode under pressure from the off. Rhode played a very close style of football and retained possession as much as possible and had to work very hard to get within range of the opposition goals. At half time Rhode went in to the break leading on a well fought score line of 5 – 3 to 3 – 3 with very little separating the sides. With the wind to their advantage in the second half Rhode again changed their style of play and made the ball do most of the work and moved it very quickly to their forward line who picked their scores with incredible accuracy. The strength of the Rhode team came from their panel with everyone playing their part on the day, and as every player gave everything on the pitch, those that came in to replace them continued to influence the direction of the game. Rhode finished the game as winners on a scoreline of 9 – 14 to 3 – 3. Rhode have now topped their group unbeaten and will progress to the Leinster Semi-Final Cup Stages (Dates and venues to be confirmed in the coming weeks).

Rhode GAA Club would like to thank Wendy Donegan, Alan Fox, and the rest of our hosts from Wolfe Tones who made everyone feel very welcome, and provided both teams with some much needed refreshments and warm drinks afterwards. We would also like to thank the referee on the day, Stephen Dowling of Navan, who ensured that the game flowed at all times and had the respect of every player and manager on the field.

If Parents have any queries in the meantime please contact: –

Registration forms will be available for completion on the day for any child not already registered for the coming year.

There was a great turnout at the U7-U9 Turas Training Session on last Thursday night in Rhode GAA Hall . Massive well done to Coach Liam O’Reilly for a great session.

Hard Luck to Offaly Senior Footballer’s who lost out to Down on Saturday evening last on a score-line of 2-12 to 0-10 . Offaly were down 2 at the break and playing well but Down took over in the second half.

Rhode U’13 Footballers are travelling to London to take part in the Peter McGlynn Tournament on Friday May 3rd and returning Sunday May 5th. All flights are with Ryan Air and anyone travelling will be flying out from Dublin to Luton at 4pm . Return flight will be the 2:15pm  Luton to Dublin  . Anyone wishing to travel with Team, parents and club officials for the weekend book flights now as only a few places left  now for Further information contact Minor Chairman Stephen Darby or Minor Secretary Tracey Murphy .

There was no winner of the Rhode GAA Lotto Draw that took place on the 25th of February for a Jackpot of €6,200.  The numbers drawn were 5 6 14 19.  The club would like to thank all those who supported the draw and thanks to Killeen’s for the use of their premises and for their help and cooperation.  The following matched three numbers and received €50 each.