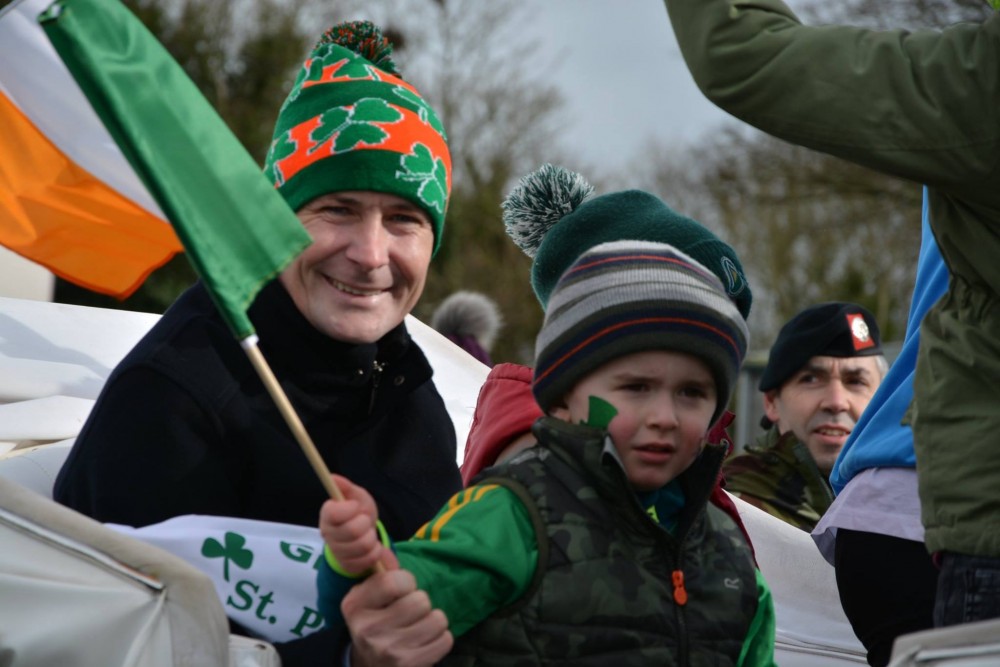 St.Patrick’s Day Parade
What can be said about Sunday’s St.Patrick’s Day Parade only wow what an amazing parade that would blow any big town out the water. Our little village and parish can be very proud as over 46 floats, finest of cars, honda 50’s , machinery, trucks and people. St.Patrick was on hand  to give his blessing to all on the route  from the power station to the village.  Grand Marshal  the great Pat Smullen led the parade joined with his kids , nieces and nephews   who enjoyed their journey in a carriage fit for royalty flanked by  members of the Irish Defence Forces .  Over 46 floats’s, organisations , clubs, schools, car’s, tractors. trucks etc flowed down to the village with all putting in a massive effort with float’s done up spectacularly full of colour and vibrancy.  One by One they flowed into the village and each stood at the main stand as their name was proudly called out for the massive crowd in attendance . It was amazing to see the massive crowd who were along the route and in the village.
A massive thank you to our two wonderful Judges Paul Hickey and Melissa Hickey who we welcome from Canada. They did not have an easy job but they picked their winners of best float and Best dress.
A massive well done to the members of Rhode GAA Senior team for their float the Ttrump wall  who won best float and to Kevin Kellaghan who won best dress as Willy Wonka on Rhode Construction float.

There are to many to mention  but you all know who you are many thanks for  entering a float and taking part in our Parade and those who decorated their houses along the route. We have wonderful group’s , organisation;s businesses, people who made this parade very special. thanks also to those who helped and supported the bucket collection for the U’13  footballers trip to London.

In The Village PJ McCormack  entertained the massive crowd in attendance. A big thank you to PJ . As always Jody Gunning was great as Master of Ceremonies.

To An  Garda Síochána and our stewards who kept the traffic flowing and everyone safe a big thank you for your hard work..

A massive Thank you to Derek &James Delaney Oak Wood Stud Greenhills Rhode for sponsoring the lovely Horse Drawn Carriage for the Grand Marshal . , Colm and Cathriona Killeen for the warming refreshment’s . Offaly County Council for their grant to defray the cost., Francie McGuinness   Edenderry for the use of his Trailer which was our main stand.

A massive thank you to photographer Joan O’Brien who is always on hand to capture the special moments of the day. Joan will be making photographs available to purchase and putting together clips for social media.

Fnally A big thank you to all who sat on the committee over the last number of months you did trojan work and can be very proud.  I know they will not like this but Two men who over seen the committee and made everything come together deserve a mention Stephen Darby and Peter Kilmurray

We are super delighted to Announce A Night of Champions on Saturday April 6th as we celebrate our Senior Footballers winning their 3rd championship and 4 league in a row our Junior footballers winning the division 4 league and to top it all off celebrate the massive achievements of Fahy handball duo David Hope & Noel Murphy . Special guests will be announced very soon. Tickets will be €30 and will be on sale this Thursday night  21st March Killeen’s lounge 8pm to 9-30pm. and every Thursday nights up to the event and also at Lotto draws on Monday nights   . Let’s come together to celebrate the great achievements of our two clubs

A Reminder that this this week it the final week where you can purchase a ticket.

Be In with a Chance to win up to 30 cash prizes.

Entry into the 5 draws and a supporters car Sticker

Rhode U’15 footballers kick of their year when they take on Edenderry in Fr.Dowling Park this Wednesday March 20th at 7pm.

Offaly were defeated by Laois on Saturday afternoon last in 2nd last game of the league on a score-line of  2-12 to 0-15.  Offaly will have to  beat Sligo  to  be in have a chance to stay up in Division 3. .
On The Offaly Team/ Panel from Rhode  Anton Sullivan  , Niall Darby, Eoin Rigney , Ruairi McNamee & Niall McNamee

Rhode U’13 Footballers are travelling to London to take part in the Peter McGlynn Tournament on Friday May 3rd and returning Sunday May 5th. All flights are with Ryan Air and anyone travelling will be flying out from Dublin to Luton at 4pm . Return flight will be the 2:15pm  Luton to Dublin  . Anyone wishing to travel with Team, parents and club officials for the weekend book flights now as only a few places left  now for Further information contact Minor Chairman Stephen Darby or Minor Secretary Tracey Murphy .

There was no winner of the Rhode GAA Lotto Draw that took place on the 11th of March for a Jackpot of €6,800.  The numbers drawn were 5 23 25 28.  The club would like to thank all those who supported the draw and thanks to Doyle’s for the use of their premises and for their help and cooperation.  The following matched three numbers and received €200.

Happy Birthday
A very happy 80th Birthday to our Club President the Iron Man Paddy McCormack . All In Rhode GAA send our best wishes to you Paddy.

Wedding Bells
Massive Congratulations to Mr & Mrs  Joe & Sarah Malone  on their Marriage that took place on Saturday  last. May you both be blessed with much joy and happiness in your life together.

May Margaret Rest In Peace.