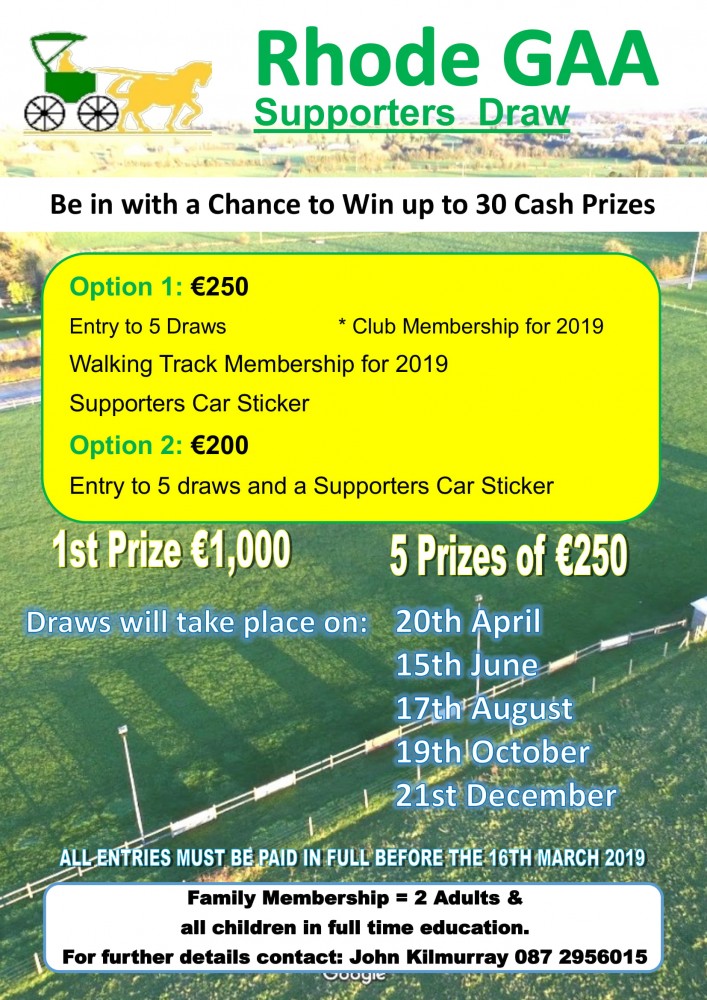 Next Draw will be on June 15th

A massive thank you to all who supported the draw and turned out on the night to see it take place. A massive thank to Tommy Doyle and staff for the use of the premises and John & Paddy for the great music A great night was had by all.

The U13 Trip to London Easter Draw took place on Saturday night in Doyle’s lounge it was a massive success many thanks to all who supported the draw. The Following won the prizes:

Thank you to our prize sponsors Brendan Glennon, Bill Kenny of Miracle Moor products, Shaz Hairdressers, Oliver and Tracey Murphy, Tommy Doyle , Eugene Murphy , Stephen Glennon and Richie Glennon. A special mention for Tommy Doyle for the use of his premises . Thank you to all for supporting our Underage players in their upcoming trip to London and to the players themselves who worked very hard on this fundraiser.

On Saturday Night last  in Doyle’s Lounge  members of the Rhode St. Patricks Day Parade made a special Presentation to Pat Smullen with a framed Collage  of photographs marking his role as Grand marshal in our third  St.Patrick’s day Parade. Presentations were also made to Derek & James Delaney of Oak Wood Stud who kindly sponsor of the fabulous carriages that lead the parade. Other Presentations made were for Best dressed and Best float.Cross-County Leinster League
Rhode U13s travelled to Meaths County Grounds in Dunganny on Saturday morning to compete in the Leinster Cup Finals stages.Unfortunately it wasn’t their day and they were beaten by an excellent Cooley Kickhams of Louth in the semi final on a scoreline of 1-6 to 2-16.
The panel on the day for Rhode were as follows: Kylan Owens, Paul Stynes, Odhran Briody, Sean Daly, Cameron Egan, Scott Hannon, Barry Dunne, Adam Kelleghan, Billy Quinn, Ryan Murphy, Gavin Murphy, Richie Glennon, Joshua Kelleghan, Owen Murphy, Nathan Glennon, Jamie Glennon, Rhys Glennon, Jamie Ennis, Tiernan Ennis. The Management Team consists of Stephen Glennon, Brendan Glennon, Jimmy Hannon, Pauric Murphy and Derek Egan.
Rhode GAA Club would like to thank Niall Brady and Cooley Kickhams for an excellent game of football. We would also like to thank Dunganny, the referee Paul Mooney, and the Leinster team of Hannah Horan and Alan Mulhall for organizing and hosting the event.

Rhode take on Clara in Fr.Dowling Park this Wednesday April 24th at 7pm.

Rhode travel to Gaeiic Park to take on Edenderry this coming Friday April 26th at 7pm.

There was no winner of the Rhode GAA Lotto Draw that took place on the 15th of April for a Jackpot of €7,800.  The numbers drawn were 1 12 15 29.  The club would like to thank all those who supported the draw and thanks to O’Toole’s for the use of their premises and for their help and cooperation.  The following matched three numbers and received €50 each.