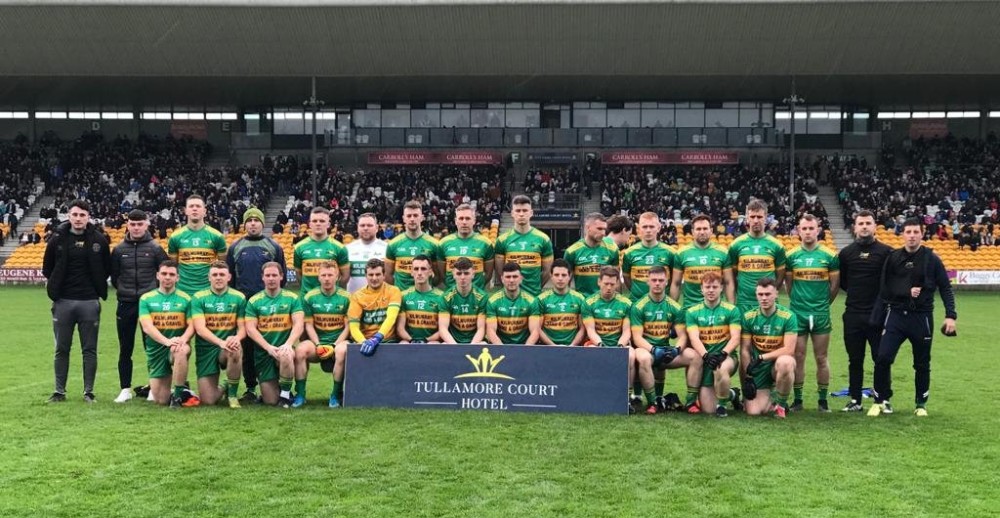 Rhode Senior footballers  gained a second chance following a nail biting finish and a super goal from Niall McNamee against Tullamore yesterday afternoon . The Tullamore goalkeeper was just pulling the ball out of the net when referee Marius Stones blew the full-time whistle with the final score reading 1-08 each. Rhode will feel hugely relieved but at the same time they deserved the second chance at it for their hard work and keeping the scores close throughout.

Many thanks to all our Supporter’s & Sponsors  especially all local businesses, and friends of Rhode GAA who never let us down with your support.   Thank you to Colm Killeen and staff for their hard work in feeding the team.

Provisional date for the Clubs AGM  is Wednesday November 24th.  All members will receive official notice of the AGM in coming weeks.

We are  continuing with our Rhode GAA Supporters Draw to Aid our Planned Development for our Grounds.A massive thank you for your previous support of our club draws and we hope you can continue that wonderful support in 2021.  This is a large project and will be a benefit to Rhode GAA/LGFA Clubs and also the community . Our success on the field is not reflected in our grounds. We need to work together to achieve our goals. Also, our Underage teams are going well and they deserve the opportunity to have great facilities to progress in their development. This cannot be achieved without the support of our Community

The  draw will provide you with the chance to win 1st prize €1000 & 5 chances to win €250 in each draw and there are 5 draws taking place throughout the year. 3rd Draw was held on October 16th  Next Draws will be as follows   • 20th November • 18th December

If you or someone you know is struggling right now; you’re not alone.

Our walking track  remains open for our members to exercise safely .

We Ask that Those using our facilities respect the grounds by either bringing home your rubbish or use the many bins that surround the walking track .

Massive Congratulations to Clonbullogue GAA Club  on winning the  Intermediate championship  on Saturday especially our own past and current players Jack Kilmurray (Clonbullogue manager) and Ciaran Heavey who is part of their management team.

.The Rhode GAA Lotto Jackpot was €11,200 and it took place on the 26th of October while adhering to the guidelines.

There was one winner with three matching numbers who won €200.

Rhode GAA Express our deepest Sympathy to all the Glennon family  Karen and James and their children, Frank and Margaret, brothers Greg, Joe and Richard, sisters Breda, Nan and May, brothers-in-law, sisters-in-law, nieces, nephews, relatives and friends on the passing of   John.

It’s with the heaviest of hearts we learned  last Wednesday of the passing of one of our clubs greatest Gaels – John “Beezy” Glennon.  A characteristic of a committed person is their ability to make commitments and stick to them. Words such as maybe, or can’t, are absent from their vocabulary.  This can certainly be said about our dear friend John Glennon with regard to his dedication and commitment to Rhode and Offaly GAA.  In his 64th year John Glennon has given most of his life  (41 years) to the cause of Rhode GAA Club, as a player and administrator.

John has served this club and county in many administrative roles ranging from: 12 years as Club secretary, 35 years as club P.R.O., 6 years as assistant PRO, team selector, team secretary, County board delegate, Lotto administrator as well as taking an active role on numerous committees within Offaly GAA. John was heavily immersed in our clubs fundraising activities. As a player, John will be fondly remembered as a wing back on the U21 championship winning side of 1975 and he was a panel member as our seniors took home the Dowling cup in the same year. Most importantly, John Glennon will be remembered as a man of integrity, who was a helpful as he was knowledgeable (about most things, not just GAA) and put simply, he was a gentleman.

John has battled gallantly with ill health for the past number of years although he never complained or growled about his lot. Every challenge was met head on. The easiest thing for him would have been to take a break from club activities and say “I have my time served”. However, as was typical of Beezy, his commitment and drive never abated and he ensured that whenever his health allowed he was central to activities in our club. Only a few months ago he was helping out at the weekly club lotto draw.

Johns funeral mass took place on Friday afternoon in St.Peter’s church Rhode followed by burial to the adjoining cemetery. He was giving a great send off with a full guard of honour from all the club which included all Adult players, under-age footballers, Ladies Club , members and past players, County board officers all  said their farewells  to John .