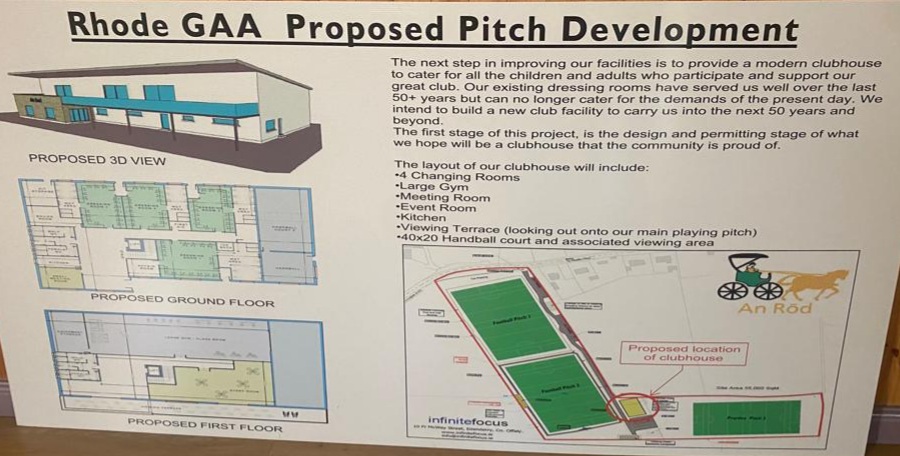 133rd Rhode GAA Club AGM 2021
The 133rd  Rhode GAA Club took place on Wednesday night last  November 24th in Rhode GAA Hall  . Chairman John Kilmurray opened the meeting by welcoming all in attendance. Fr,Greg opened with a prayer  which included  all  members  especially those who died during the year.  The minutes of last year’s Agm were read out and then the Club Constitution  was passed; it was down to the various reports where the Secretary , Treasurer ,  Chairman and Minor Chairman gave excellent and detailed reports on the year gone.

In his 3rd agm address chairman John Kilmurray gave an excellent report highlighting the year that was 2021. To summarise, John highlighted a number of key items such as performance by our Adult teams and while championship silverware may be missing we had 3 adult teams in championship semi finals with our Seniors being defeated in the County final and our Juniors collecting a league title earlier in the year. That our achievements for a small club and according to the stats would of the top successful clubs in Ireland.  John went on to thank all our management teams for their hard work. John paid tribute to Ollie Murphy, Regina Swaine and Ger Noonan for their hard work over the years  and thanked them for their service in the positions they had held. John gave a detailed update on Fundraising that now leaves over €100,000 in our development fund. Thanked all our sponsors big and small for their continued support. Our lotto is holding its own and could grow more. Thanks Paul McNamee& Robert Kellaghan for their fantastic work in our club grounds. In finishing up John Thanked all on the committee for their help and guidance  in his 3 years. Thanked his family for their love, patience and support in allowing him to do the job of chairman. John went on to pay an emotional tribute about those we lost throughout the year most especially Liam Swaine, Dean Morris & John Glennon. All who will be greatly missed by us all.

Minor Chairman Ger Noonan noted a very positive year on  and off the pitch for the under-age club highlihting  a number of championship titles being won  for the 2020/2021 season such as Minor B, U13B ,U13A shield etc. Winter training was continuing as we look forward to 2022.
Secretary Eoghan Hickey Praised and thanked outgoing Chairman John Kilmuuray for the massive work he has done in 3 years especially in the middle of a pandemic. highlighting some of the achievements notably  the fundraising for our much needed progress on our development plans.

Assistant Secretary  No one elected on night .Peter Kilmurray name will go forward to Executive for ratification.

PRO Robert Kellaghan made an emotional tribute to his friend and Mentor John Glennon. He highlighted work that Beezy had done weeks before  his death which included ordering the division 3 league medals, getting a number of cups engraved and also ordering new funeral armbands. He thanked his Assistant Paul Hickey  for his fantastic work and also thanked Rhode Ladies PRO Pia Stynes  for her help and cooperation. In finishing Robert thanked all our Offaly press for their continuous support in getting the club’s message across.

There were a number of other questions which included  achievements needing to be updated on the website, Status on Management teams especially Senior.  It was also highlighted that the gate receipts received from hosting games was way up on previous years .

In Reply to these John Kilmurray stated that  management  teams would be sorted very soon.  Robert Kellaghan replied that Work will soon be underway updating achievements on the website. On gate receipts the club were grateful and always  happy to host games when possible.  It was highlighted that currently our main pitch was under maintenance getting resodded and considerable fixing up. The traffic on our pitches is considerable with 18 teams alone training weekly in the height of the season.  John Kilmuuray & Aine Egan highlighted the need for more people to get involved in the day to day running of the club as we move forward especially with our club development of club house. We should all be proud of our achievements and need to be highlighting them every chance we get. Let everyone Know.
Chairman John Kilmurray closed the meeting by thanking all who came and  wishing everyone a happy and safe Christmas and enjoyable 2022.
Offaly GAA Development Squads
Our under-age club currently have nineteen footballers involved in Offaly development squads at U14, U15 & U16 age groups. That is a wonderful number to see involved playing for their county and getting a taste of that experience as well as getting to know their fellow teammates from different clubs. They have already played a number of games already in the last couple of weeks with Offaly U15 footballers playing in the Adam Mangan Tournament at the weekend. Keep up the good work lads. Our  Under-age Club Representatives: U14Adam Kellaghan, Owen Murphy, Luke Mahon. James Taylor. Sean McGovern, Rhys Glennon, Billy Quinn, Joshua Kellaghan, Odhran Briody.U15 Ryan Murphy, Barry Dunne,Ross Healion,Gavin Murphy, Cameron Egan  Ethan Hannon,  U16 Noah Swaine, Charlie Cullen, Ryan Kellaghan, Ben Kennedy
Christmas Food Appeal
Following on from the  overwhelming support by the people of the Parish it has been decided  we will hol it again 2021.  It will take place on Saturday December 4th  in the grounds of Rhode Hall in line with Covid-19 restrictions from 11am to 1pm  to help facilitate Ken Smollen and his group of great workers who support those in need in our community.
Items needed for each food pack are as follows
2 boxes of breakfast cereal, tea, sugar, 3 tins of beans, 2 tins of spaghetti hoops, 2 tins of dessert rice, 3 packets of soup, 2 packets of pasta, jar of pasta sauce, packet of boil-in-the-bag-rice, 3 packets of biscuits and a packet of cream crackers and other items when available including tinned fish/peas/carrots, jam, chocolate and other treats for children.

We are  continuing with our Rhode GAA Supporters Draw to Aid our Planned Development for our Grounds.A massive thank you for your previous support of our club draws and we hope you can continue that wonderful support in 2021.  This is a large project and will be a benefit to Rhode GAA/LGFA Clubs and also the community . Our success on the field is not reflected in our grounds. We need to work together to achieve our goals. Also, our Underage teams are going well and they deserve the opportunity to have great facilities to progress in their development. This cannot be achieved without the support of our Community

The  draw will provide you with the chance to win 1st prize €1000 & 5 chances to win €250 in each draw and there are 5 draws taking place throughout the year. 4th Draw took place on November 20th.Final Draw of 2021 will take place on 18th December

The 2022 Leinster Senior Football Championship draw took place on Saturday November 27th  Offaly Senior Footballers will play Wexford in Round 1. Winners take on Dublin in the Quarter Final.
Did You Know !!

If you or someone you know is struggling right now; you’re not alone.

Our walking track  remains open for our members to exercise safely .

Members are asked to obey signage and maintain Covid-19 social distancing measures.We Ask that Those using our facilities respect the grounds by either bringing home your rubbish or use the many bins that surround the walking track .

The Rhode GAA Lotto Jackpot was €12,000 and it took place on the 22nd of November while adhering to guidelines.

There were three winners with three matching numbers who won €70 each.

Get well wishes are extended to all of the people of the parish who are ill or hospitalised at the moment,
Sympathy
Rhode GAA express our deepest sympathy to the Minnock family and all in Shamrocks GAA Club on the passing of Martin Minnock. Ár dheis dé go raibh a ainm.