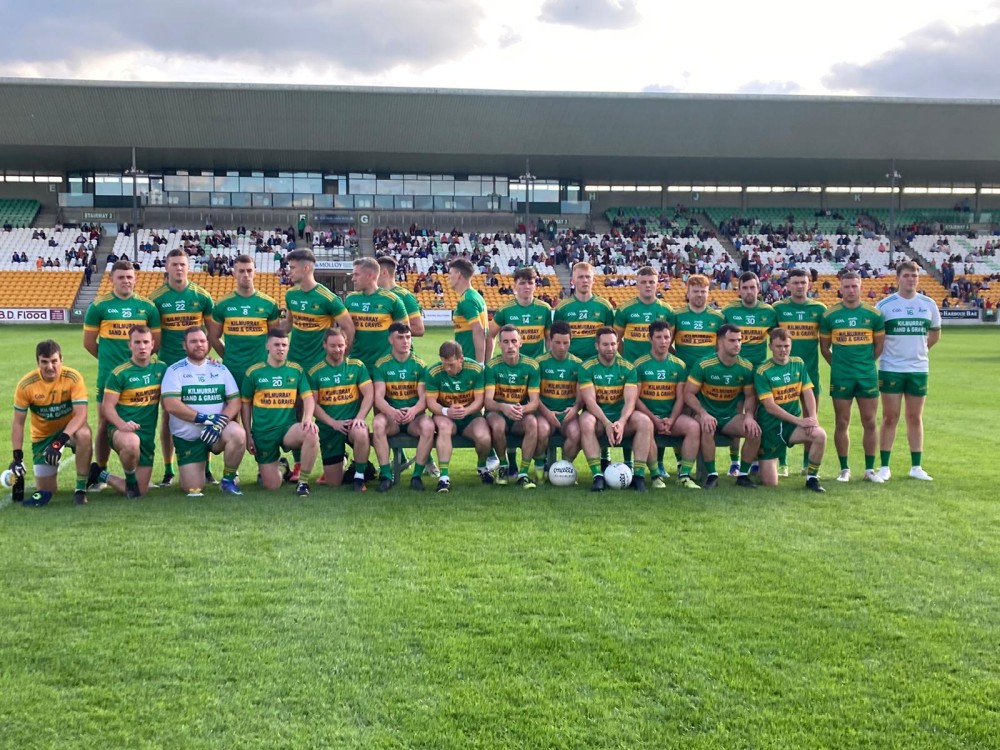 Rhode Senior Footballers reach their 11th Consecutive County Final following a penalty Shoot out win over Ferbane.  In what was a long evening in O’Connor Park and a game that could possibly have gone  Ferbanes way but it didn’t thankfully.  Rhode were down 1-05 to 0-6 at half-time  but never gave in and kept battling back and went ahead a few times and scores changed the scoreboard for both sides .Ferbane went ahead near the final whistle but Rhode continued to fight back  Anton Sullivan was heading in and I’ve no doubt would have gotten a score only for taking out of it with a nasty tackle , Rhode got the free and extra time was to come. Extra time was score for score but no winner.  No matter how much they tried Ferbane could not succeed to Beat us. Rhode never gave up Penalties it was and thanks to a score plus a great save  from Kenneth Garry put us into the final 0-3 to 0-02 l.  Bring IT On !!  County Final will take place on Sunday September 25th . More details to follow.

Calling all our great Supporters to cover the Parish with colour whether it be bunting or flags. It . We need a massive Support  so lets get behind our Boys for Sunday and please god the Dowling Cup back in the Village !!

Very best of luck to our Minor Footballers ans management team in the championship quarter final against Cloghan on  Saturday September 17th in Cloghan 11am . See our social media pages for ticket link.

Rhode Junior A footballers were unfortunately defeated by Kilcormac Killoughey on a score-line of 0-11 to 0-07 in  what were woeful conditions for football . Heads up lads you this us proud this year reaching a division 4 league final and a championship semi final which is a great achievement . Thank you lads and a special thank you to the management team of   Tom Coffey, Ger Noonan, Johnny Daly and Andrew Dal for your great work throughout the year.

Rest of Draws will take place on

On World Suicide Day September  Saturday 10th , a tree was planted at Ballybryan school today in remembrance of those who have passed,  their families and those who are in turmoil presently please reach out and speak to someone. Rhode GAA Community Group would like to thank all who supported our walk earlier in the year and also many thanks to Anthony Kilmurray of Anto’s Barbers for donating our Remembrance Tree.

The Rhode GAA Lotto Jackpot was €4,400 and it took place on the 6th of September in Killeen’s

There were no winners with three matching numbers .So four names were pulled by lucky dip, each winning  €50

The lotto can be played online before 12 Noon on the date of the draw see the Rhode GAA Website / Facebook / Twitter or Contact your usual ticket seller for details.  The draw will take place every Monday night and will be live on Facebook between 8 pm – 8:30 pm.  Next week’s draw will be held in Killeen’s.

In Memory of Paddy “the Pilot” Kerrigan

Rhode GAA express our deepest sympathy to the Kerrigan Family on the passing of the legendary figure, Patron and Vice President of the Club Paddy “the Pilot” Kerrigan.

Rhode GAA affairs over many years. Be it coaching at underage or adult level, ladies teams or mens, their dedication and love for the club is unwavering.

His many grandchildren and great-grandchildren are now the players and coaches of Rhodes present and future. It gave Paddy great satisfaction, seeing them tog out in the Green and Gold of his beloved Rhode.

Paddy’s heart was intertwined with Rhode GAA all his life and continued to support the club attending games and functions up to recently. He was a dedicated officer of the club and finished up as a Patron & Vice President of the club. Paddy will never be forgotten for his dedication to Rhode and for the legacy he leaves behind.