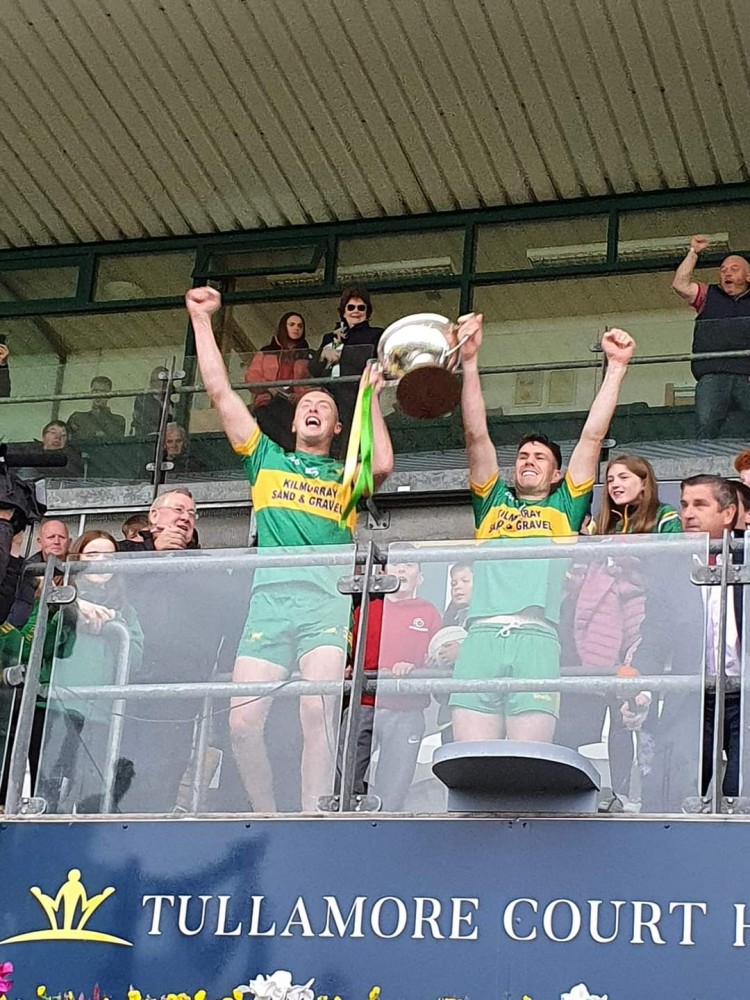 County Champions For The 31st Time !!

Rhode Senior Footballers gave us in my opinion one of the sweetest championship wins since 1998 . Not bad for a team of so called geriatrics  meant to be past their prime. Not that Rhode has anything to prove they certainly put down a marker that you can never write them off and If you do. Do it at your peril. The First half was a tight affair with Rhode holding it tight despite Tullamore 2 points up at half time. Rhode never panicked and with twelve minutes to go we got a vital goal taken beautifully by Ruairi McNamee.   It was over and back then and there were a number of draws with a Vital score coming from Niall Mcnamee to secure the Victory. and our 31st Senior Championship. Final Score read 1-09 to 0-11. There were massive scenes of Jubilations from the massive Crowd of Supporters in attendance to See Captain Niall McNamee lift the Dowling Cup.  Niall McNamee dedicated the win to the Late John Beezy Glennon, Dean Morris, Emmet Mayon, Paddy Kerrigan and the many great Rhode people sadly not with us.

Congratulations to Anton Sullivan on receiving the Man Of The Match Award. Well Deserved

Very best of luck to our Minor Footballers who take on Kilcormac/Killoughey on Saturday October 1st at 11am in Ballinagar .

U15 A Football Final

Very best of luck to our U15 footballers who take on Tullamore in the County final on Wednesday October 5th at 7pm in Tubber.

U15 A Football Championship Semi Final

Our U15 Footballers had a superb win over Na Fianna 2-09 to 3-05 to book their place in the U15 County Final  on Wednesday evening last.  They will play Tullamore in the Final. In what was a real battle right to the end Rhode played brilliantly throughout and fought off the advances of Na Fianna, Rhode took some great scores and quite possibly could have won the game by more but as they say a point will do. There was a massive atmosphere and big support in The Faithful fields. A truly superb Venue.Well done to the team and management on reaching the county final. .

Our Junior C footballers were unfortunately defeated by neighbours Edenderry 5-09 to 2-08 in Croghan on Friday night last in the Quarter final of the championship. Rhode kept in the  game for long periods but Edenderry were too strong in the end. Keep the heads up lads you did us massively proud throughout the year. It’s not easy but you can take pride in the fact that with your support we as a club could put out a third team. Massive thank you to all the team and especially the management of Kieran Hope & PE Murphy.

Well Done to our Rhode Warriors team who took part in the  all County Nursery in the faithful fields on Saturday.

Massive congratulations  to our own Bill Glennon & his team of umpires on a job well done officiating the Junior A County Final on Saturday afternoon last.

The Draw Took place in Doyle’s

Rest of Draws will take place on

A very Happy 90th  Birthday to Mary Murphy . Hope you had a great birthday

The Rhode GAA Lotto Jackpot was €4,800 and it took place on the 19th of September in Doyle’s

There were two winners with three matching numbers who won €100 each.

The lotto can be played online before 12 Noon on the date of the draw see the Rhode GAA Website / Facebook / Twitter or Contact your usual ticket seller for details.  The draw will take place every Monday night and will be live on Facebook between 8 pm – 8:30 pm. .

Rhode GAA express our deepest sympathy to the Reidy  and extended families on the Passing of Mrs Phil Reidy Rhode Village. .  Mrs Reidy will be remembered by many  past Students of   Scoil Mhuire Naofa Ród  where she spent  many years Teaching  alongside her husband Gerry. 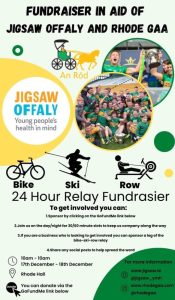