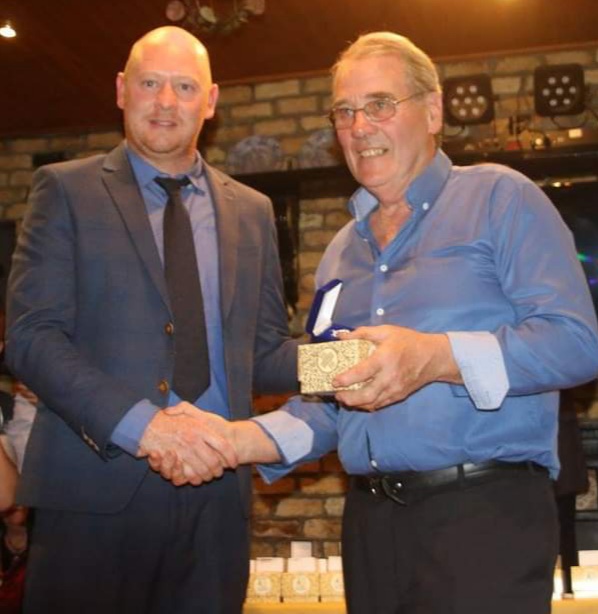 The 134th  Rhode GAA Club took place Friday  night last  November 25th in Rhode GAA Hall  . Chairman John Kilmurray opened the meeting by welcoming all in attendance. Deacon Gary Mooreopened with a prayer  which included  all  members, especially those who died during the year.  The minutes of last year’s Agm were read out and then the Club Constitution  was passed; it was down to the various reports where the Secretary , Treasurer ,  Chairman and Minor Chairman gave excellent and detailed reports on the year gone.

Minor Chairman Pauric Murphy gave an extensive breakdown on how the under-age club was going and praised the work of all the under-age mamnagement teams, Coaching Coordinator Joe Kilmurray . U15s and U17s won the league and were unfortunate to have been beaten in Championship finals. Gave Special mention to minor secretary Tracey Murphy and praised her dedication and hard work throughout her 9/10 years in the role.  U17 team Manager spoke of hard work and dedication the u17 footballers gave through 2022 winning the league and reaching the county final. Thanked his management team  of Declan Gorman, Pat Daly and Derek Kellaghan saying Derek Egan will be joining their management team for 2023. They had a panel of about 34 lads togged out which is superb numbers .Saying the future is bright and with the u15s & U17 footballers reaching their county finals would have given the Seniors a massive lift. Carried out a strength and conditioning  programme giving special mention and praise to Conor & Ruairi Mcnamee of C-Bear Gym in thanking them saying it was working well for under-age lads and driving them forward as young lads look up to both Rauiri & Conor.  In finishing Paschal highlighted Cuan Mhuire addiction talk that was held for under-age players saying it was a great talk on how to educate them on good habits. Need for Co Board to maybe look at the best time for Minor Championship to take place with players not available due to Summer Holidays.  Handing Back to Pauric Murphy Pauric thanked  Paul McNamee, Johnny Daly and Robert Kellaghan for their hard work looking after the club grounds. Pauric made special reference to the parents of our Under-Age teams for their massive support regarding fundraising and travelling all over with their kids to play matches.  Thank you one and all.

In his 4th and final  agm address as  chairman John Kilmurray gave an excellent report highlighting the year that was 2022. To summarise, John highlighted a number of key items such as performance by our Adult teams especially our Senior footballers winning the club championship , appointment of Games Promotion Officer Reece Cuddihy and strength and achievements of our under-age teams, progress on development , over €130,000. put aside for development over the 4 years and the growth of the one club  with Rhode Ladies.  John spoke of his pride in serving as Chairman of this great club saying it was a great privilege and hoped his term would be seen as a good acknowledgement of hard work that has been done so far.  He Stressed he could not have done it alone without the help from the full committee and all the members of the executive. It shows the importance of committee’s and hopes more people will get involved so the club can grow further . Thanked all our sponsors most especially praised all the great small local businesses who never fail to support the Club.  John wished the new officers well and thanked those who he had worked with that were stepping down Ritchie Glennon and Tracey Murphy. Made a special mention of the Senior team Management Dec Gorman, Anthony Murphy, Stephen Darby for their amazing work and also Kitmen Pat McManus & Ollie Murphy for the amazing work they do saying their were credit to the club.He  thanked Paul McNamee, Robert Kellaghan and newly appointed caretaker Johnny Daly  replacinging Robert Kellaghan  for the work they do in looking after Fr.Dowling Park. In finishing John praised and thanked under-age mangements for their excellent work. Spoke on the great fundraising that was done and about the great fundraiser planned by Ruairi & Conor McNamee and for everyone to get behind it.

Fr Greg Corcoran PP. ( An additional Patron will be put forward and ratified by club executive)

Assistant Secretary ( As  no one was nominated  on the night ..It will be upto  the Executive to ratify the next name put forward. )

Committee outgoing en masse (additions will be made by club executive)

On his election as chairman Eugene Mulligan  thanked and praised John Kilmurray for the work he had done as chair especially in fundraising ,  having good management teams in place  from under-age to Senior .Mentioning that Club won 2  Senior Championships under his chairmanship, Looking Forward to continuing and building on the work already done in the club especially with the support of all members and the executive committee .

Club Membership  was passed at the AGM but one change was made to Youth Player and Student player/Non player membership which will now be a fee of €50  following a discussion from the executive and the floor .

PRO Robert Kellaghan Congratulated the newly elected officers and gave special praise to outgoing Chair John Kilmurray and Minor Secretary Tracey Murphy for their great work during their terms . Thanked the Offaly Press for their help and support in getting our message . Robert gave a special mention to his assistant PRO Paul Hickey and Rhode Ladies PRO Pia Stynes for their help and work they have done throughout the year. Robert went on to talk about volunteerism and what it means and how its just not a few hours a week but can mean 24 hours a day depending on your role. All human and volunteers  will never get everything right and need to understand the effects it can have on people’s lives and health. Need to be positive and nice to each other. This led to applause from all in attendance.

James Murphy raised the issue of needing more referees in the county and hopefully Rhode can supply more referees. He congratulated Bill Glennon  on refereeing the Junior A Final. There was a general agreement from many on the need for more referee;s and hopeful Rhode can Supply more. An example that was given was how ladies football involves their young coaches and players in refereeing under-age  games.

Other Discussions took place on the corporate Trustee;s format and also about our planned development and further works that need to take place in Fr.Dowling Park . These were answered by Chairman John Kilmuuray and  Secretary Eoghan Hickey

Chairman John Kilmurray closed the meeting by thanking all who came and  wishing everyone a happy and safe Christmas and enjoyable 2023.

Following on from the  overwhelming support by the people of the Parish it has been decided  we will hold it again this year 2022 .  It will take place this coming  Saturday December 3rd  in  Rhode Hall from 11am to 1pm  to help facilitate Ken Smollen and his group of great workers who support those in need in our community.  For Further information contact Tracey Murphy 0872264435

Items needed for each food pack are as follows

The community of Rhode has experienced more than its share of grief and suffering as a result of tragic losses due to mental health. Both Jigsaw Offaly and Rhode GAA are brilliant outlets and supports for us all in the battle against mental health issues and suicide.

This fundraiser means a lot to the lads as the loss of team members over the last few years has highlighted the importance of mental health supports within the county and the country.

To get involved you can:

2. Join the lads on the day/night for 15/30/60 minutes to keep them company along the way and help raise funds (get in contact with any of the lads to book a time slot and receive your sponsorship card).

3. If you are a business who is looking to get involved you can sponsor a leg of the bikeski-row relay.

4. Share any social posts to help spread the word.

Following the Rhode Ladies Football AGM on Wednesday November 16th the following were  elected to their Executive & Ordinary Committee for 2023.

The Rhode GAA Lotto Jackpot was €6,600 and it took place on the 21st of November in Doyle’s.

The lotto can be played online before 12 Noon  Monday  of each week of the draw see the Rhode GAA Website / Facebook / Twitter or Contact your usual ticket seller for details.  The draw will take place every Monday night and will be live on Facebook between 8 pm – 8:30 pm.

After a long lay off  our weekly card drive  has resumed and takes place every Thursday at 8.30pm. Looking forward to seeing our old friends again and hopefully some new ones.