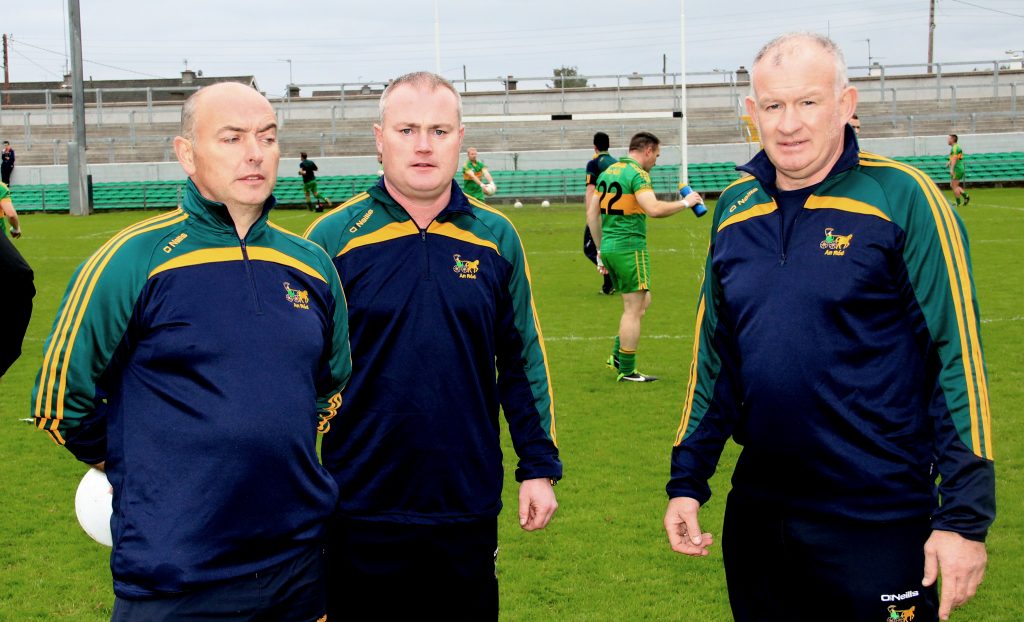 Reigning County Champions Rhode well and truly booked their place back into the Tullamore Court Hotel Senior Football Final when they easily saw off the challenge of a lack lustre Edenderry side in what was a drab affair on Sunday afternoon last.

Rhode once again looked very polished and with a whopping fifteen scores coming from play there is no doubt their final meeting with Tullamore will be an extremely interesting one indeed and one that will be a far cry from the sides meeting in the opening round five months ago.

Rhode were at their ease for so long on Sunday and once again without having to it top gear they never looked like losing this one.

Playing a good blend of football once again they took the game to Edenderry from the off and even at one stage they found themselves ahead by double scores (0-20 to 0-10) and really they were worth every inch of that.

In fairness at times it was evenly matched in the first half, but with that said every time Edenderry scores Rhode had the ability to go down the field and respond time and time again.

It was Rhode thanks to Niall McNamee who had the first score of proceedings a mere two minutes in, but what he was could do was matched brilliantly thanks to a free from Sean Doyle.

But the deadlock wasn’t to be on the cards for long and by the sixth minute Rhode were back in front 0-3 to 0-1 thanks to a brace of scores from Mark Dunne and Niall McNamee once more.

Derek Kelly fired over a beauty of a score for Edenderry by the seventh minute, but Edenderry just couldn’t get back to back scores and by the ninth minute Rhode were suddenly 0-6 to 0-2 to the good thanks to Niall McNamee, Niall Darby (with his first of seven scores) and Mark Dunne.

Then it was Edenderry’s chance to shine and by the 16th minute three quick scores from Ciaran Hurley, Derek Kelly and Keith McGuinness suddenly left only one between the sides 0-6 to 0-5.

Edenderry needed to get a couple of more scores to push Rhode, but it was Rhode who had recorded even more on the board and with four more before the break from Niall McNamee, Niall Darby, Stephen Hannon and Paul McPadden they stretched their lead to 0-10 to 0-5 with two minutes to the break.

But it was the Reds who had the final say of the half and thanks to two fine scores from Sean Doyle and Ciaran Hurley only three separated the sides at the interval 0-10 to 0-7, but it was always looking like Rhode had this one in the bag.

Rhode came out firing in all cylinders at the start of the second half and by the seventh minute of the restart they had extended their lead to 0-14 to 0-7 with points from Paul McPadden, Niall Darby (2) and Niall McNamee.

Stuart Cullen pulled one back for Edenderry but what he could do at one end was matched by Niall McNamee at the other end.

McNamee again and Richie Dalton traded scores by the 14th minute to bring the scores to 0-15 to 0-9 and while Edenderry got their tenth score thanks to a free from Keith McGuinness but Rhode were still pushing on at the other end and with further scores from Niall Darby (3), Niall McNamee and Glenn O’Connell they soon found themselves ahead by double scores 0-20 to 0-10 with three minutes to play.

The outcome of this game was not going to change but Edenderry did have the final say of the game when a long ball in from Dean Cummins caught the Rhode defence off guard with Stephen Guing on hand to palm the ball to the back of Kenneth Garry’s net.