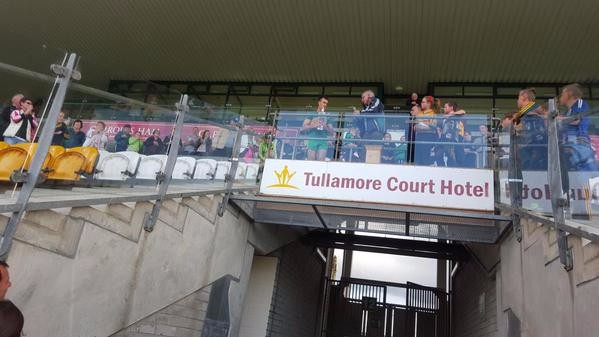 Rhode Senor Footballers captured the Offaly Senior Football League title when on Sunday last at a splendidly presented O Connor Park they had a 0-15 to 0-11 win over Clara in a tough, hard hitting encounter. Rhode were two points down at the interval trailing 0-6 to 0-8. But the introduction of Niall McNamee midway through the half was the key as he tagged on five points which were crucial. After the game County Board Chairman Padraig Boland presented the Casey Cup which is named after two of Rhode’s greatest ever players Mick and Paddy to Rhode’s Captain Alan McNamee . it has been a satisfactory league campaign for the Rhode lads where they used 29 players in all. So well done to all the panel of players and team management.

Rhode Under 8s took part in a wonderfully organised Go games  blitz in Edenderry last Saturday morning. The Teams also taking part were the hosts Edenderry, ,Shamrocks and Na Fianna . It was an enjoyable morning for all taking part and a big thank you has to go to our U,8 management team of Stephen Glennon, Declan Curley and Johnny Mooney for having our young lads so well organised.

A big thank you to the hosts Edenderry GAA for organising a successful and enjoyable  blitz.

There was no winner of the Rhode GAA lotto for weekending 2-8-15. The numbers drawn were 4-5-13-19. The Club would like to thank all those who supported the draw and thanks to Killeen’s for use of their premises and for their help and co-operation, The following matched three and receive €70 each.

The Lotto this week will be in Doyle’s.

Rhode minor footballers were beaten by Ballinamere/Durrow in their final group game in the A Minor football championship on Wednesday evening last in Durrow on a scoreline of 5-09 to 0-09. Rhode were without five players due to the debs for St, Mary’s School Rochfortbridge and their absence was felt severely. All efforts were made to change the game to an alternative date but it fell on deaf ears which was most disappointing. The winners of the game qualified for the quarter final of the A championship with Rhode now participating in the B.  With a full squad to pick from the score might have been different. However it was not to be. The team have trained well all year under the excellent management team of Anton Sullivan (manager), Pat McManus and Bill Glennon.

Get well wishes is extended to all the people of the parish who are sick or in Hospital at this time, especially former Club Player and Chairperson Liam Swaine, former Club secretary Stephen Hyland, Pa Byrne and Brigie Kerrigan.

Offaly under 16 footballers captured the Hastings Cup Shield when on Wednesday they defeated Sligo on a scoreline Offaly 3-07 to 0-10. Offaly failed to get to the A final losing out narrowly to Kildare on score difference. On the team and panel from the Rhode Og Club were Anthony Kilmurray who scored 1-01 and Daniel O’ Reilly