Presentation of Under 12 Jerseys 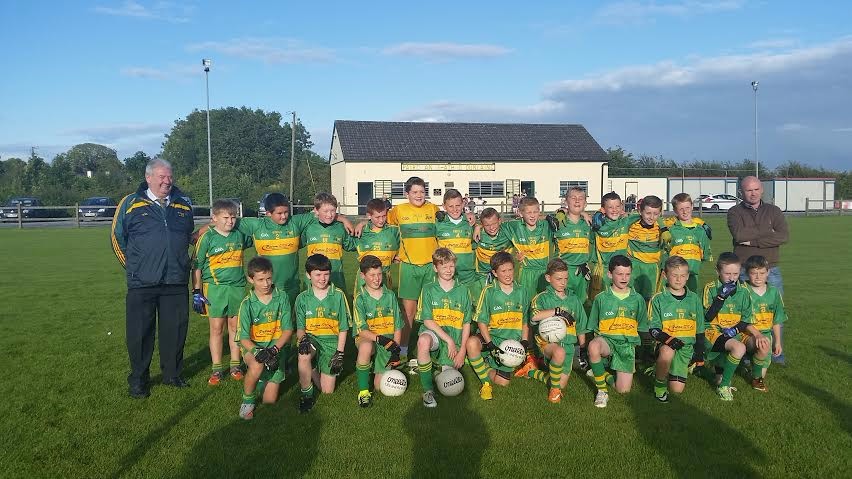 On Friday Night Rhode Under 12 Team Gathered along with Club officials and sponsor in Fr Dowling Park to be presented with their New set of Jerseys kindly sponsored by Ger Smullen Patron SVS LTD .

On Presentation Rhode GAA Chairman  Seamus Maguire Thanked Ger for his continuous support stating that Ger graced the field many times for  Rhode and reminded the players that when they go out in their new jerseys to do Rhode Justice. Ger then spoke adding it was a privilege to sponsor the team and told the young boys of how very lucky they are to play for Rhode by reminding them of the great Rhode teams of the past from senior to underage.  Finishing Ger Wishing  Rhode GAA Club The Very Best Of Luck for the coming years ahead

Ending proceedings the photographer for the Local Papers took a number of wonderful photographs of the Team in their new Jerseys!

Played in Killbeggan in a very well contested challenge match in Rhode Friday night last it was very close up till the very end with Rhode playing very well.

On Saturday morning last Rhode hosted Edenderry in the Go Games with both teams giving us great entertainment with talent on display throughout the game.

A massive  thank you to Edenderry for coming out to play us  also to the Rhode Under 10 Management  for having the team so well turned out and Pauric Murphy for refereeing the game.

Under 14 Championship play off

Rhode under 14 footballers had a 10.05 to 1.09 win over Gracefield in Walsh Island on Wednesday last in the  under 14 championship play off.

Rhode under 16 footballers were beaten by Ballycumber- Tubber in the seventh round of the Offaly Championshipon Monday last on a 4.24 to 2.06 scoreline.

Fixture Under 14 A Quarter Final

The Annual Rhode GAA Golf Classic will take place at Edenderry Golf Club on Saturday.  The format is a four ball scramble.  Prizes for GUI and non GUI teams.  Refreshments served at the 10th tee.  Teams of four €120.  Tee sponsorship €100 and other sponsorship opportunities available.  To book tee times and for more information please contact Ger Hynes 086 814 3622 Club Secretary or Oliver Murphy 089 4944 535 or any committee member.

There was no winner of the Rhode GAA Lotto Draw that took place on the 24th of August for a Jackpot of €15,000.  The numbers drawn were 19 22 25 30.  The club would like to thank all those who supported the draw and thanks to Killeen’s for the use of their premises and for their help and cooperation.  The following matched three numbers and received €100 each.  Next week’s draw takes place in Doyle’s