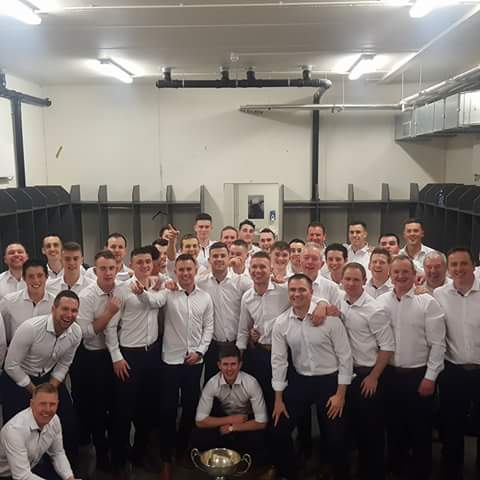 Rhode Senior Footballers sent out a strong Message as they savaged Gusserane O’Rahillys in New Ross on Sunday afternoon last on a score-line of 5-22 to 4 points . Rhode showed their intent from the throw in and their hard work payed off as Rhode led 2-3 to no score six minutes in. The game was as much as over but Rhode never took the foot of the gas and heaped up the scores with Rhode finishing up with 12 individual scorers at full time.

Rhode March on to play the newly crowned Meath champions Simonstown in O’Connor Park Tullamore on Sunday 13th of November.

As Always you did not disappoint and came to New Ross in your droves. Thank you for your loyal and continued support.

See you in O’Connor Park Tullamore on November 13th !!

Rhode U’12s travelled to MunterConnaught GAA club in Cavan on Saturday morning last to play a challenge Game. It was a very enjoyable day away for the boys. Thank you to their management team also for organising the trip.

There was no winner of the Rhode GAA Lotto Draw that took place on the 24th of October for a Jackpot of €15,000. The numbers drawn were 11 14 17 25. The club would like to thank all those who supported the draw and thanks to O’Toole’s for the use of their premises and for their help and cooperation. The following matched three numbers and received €50 each