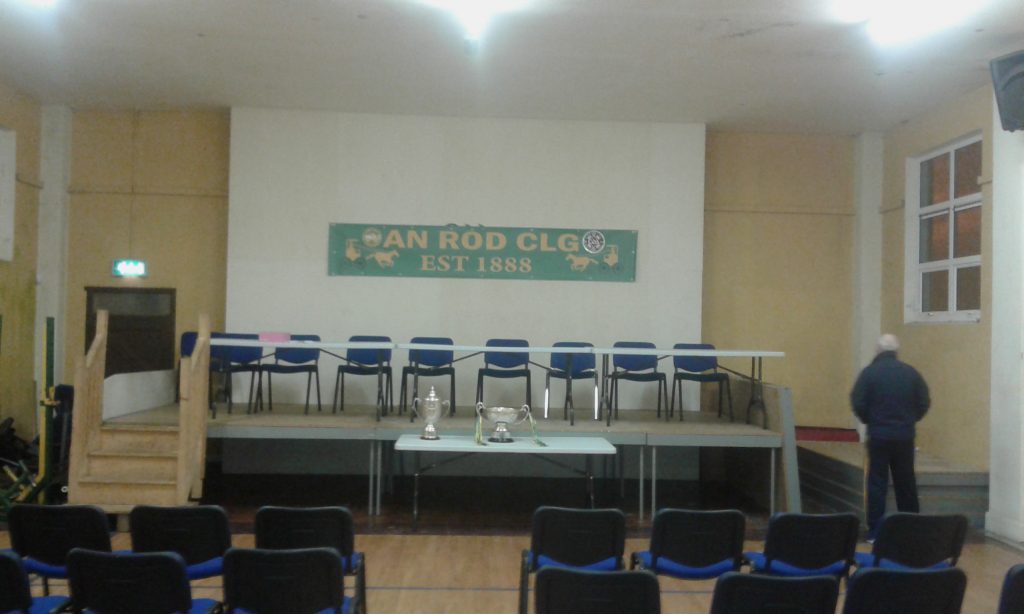 The 129th  Rhode GAA Club took place Last Friday night with over 65 members in Attendance.  Chairman Seamus Maguire opened the meeting by welcoming all in attendance. Fr,Greg opened with a payer  which included  all  members  especially those who died during the year.  The minutes of last years Agm were read out and then the Club Constitution  was passed it was down to the various reports where Secretary , Treasurer ,  Chairman and Minor Chairman gave excellent and detailed reports on the year gone.

In His Final Chairman’s Address Seamus made a number of notable remarks on what was a very Special Year for Rhode GAA winning our 27th Senior Football Title. He Congratulated Former Club Chairman Joe Masterson on his Election as President  of the GAA Handball Assocation.  Max Marble John and Alan McNamee were thanked for their Sponsorship of the Senior Football Team over the last eight years which came to an end in December. Itwas then announced that John and Orla Kilmurray Eden Decor would be the Clubs New Sponsor for 2017 onwards and were also thanked for their support of the club.  In his closing remarks said he was stepping down as Chairman due to work commitments and thanked the current commitee for their hard work he wished the incoming chair the very best of luck.

Before Moving to the Election of Officers ViceChairman Cathal Swords Thanked Seamus on behalf of the Commitee for all his hardwork and effort not alone as Chairman but previous work as vice chairman and member of the committee over the last number of years.

Minor Club Chairman (To be filled by the Club Executive)

Coaching Coordinator (To be filled by the Club Executive)

Health and Wellbeing Officer (To be filled by the Club Executive)

A Brief discussion took place where questions were put to the top table and dealt with.

P.R.O Robert Kellaghan wished to thank his Joint P.R.O’s Paul Hickey and John Glennon for their help and hard work over 2017. Robert went on to thank all those who took out and advert in the County and Leinster Final Programmes and gave a special mention to the Offaly media, Tullamore Tribune, Offaly Topic, Midland 103 Sport and their photographers and reporters for their continued help and support throughout the year.

Rhode Senior Football Manager Paschal Kellaghan spoke about Sudden Death Syndrome and about the need for awareness of it and screening of our underage players up to adults.

Newly Elected Chairman Joe Malone said it was an honour and a privelage to become chairman of a great club like Rhode and would do his upmost for Rhode GAA .

There was no winner of the Rhode GAA Lotto Draw that took place on the 3rd of January for a Jackpot of €15,000.  The numbers drawn were 14 20 26 30.  The club would like to thank all those who supported the draw and thanks to Doyle’s for the use of their premises and for their help and cooperation.  The following matched three numbers and received €100 each

Congratulations is also extended to Fahy handballer Cathal McNamee who collects his First   Offaly handballer of the year award. It was a dream year for Cathal winning a Leinster Title and going onto reach an All Ireland Final unfortunately loosing  out in a tiebreaker.

Offaly Senior Footballers got off to a winning Start for 2017 beating It Carlow on a score-line of 5-18 to 0-4 in their opening round game in the O’Byrne Cup.

Offaly U,21s also had a great win at the weekend  beating Wicklow 1-11to 1-5 in Edenderry on Saturday afternoon last.

Deepest Sympathy to the Egan Family BallyBrittan on the Passing of Tom.

May Tom Rest In Peace.