U,10’s Did Parish Proud Last Saturday/ All three Adult Teams out This Weekend 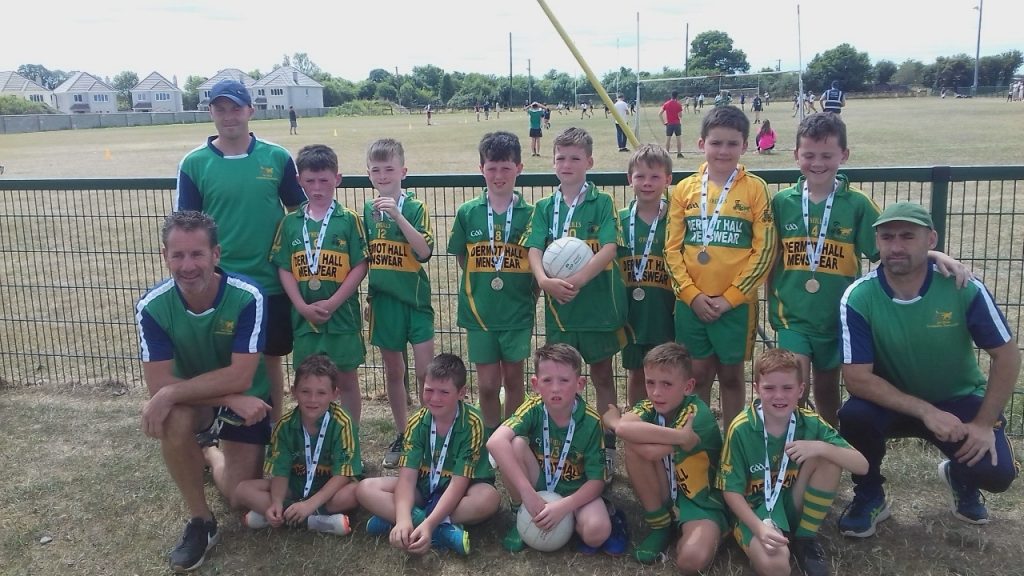 On Saturday morning last Rhode U.10 footballer’s head off to Trim GAA grounds to play in the Leinster Community games football semi final against East Meath which kicked off at 9:30am in warm and sunny conditions . Rhode played excellent from the off and went ahead at an early stage but in the 3rd ten minutes East Meath came back at them but it wasnt enough as Rhode kept them at bay in the fourth and final ten of the game. Full-Time Score  Rhode 8-05 East Meath 6-03 and Rhode marched on to the Leinster Final against Clontarf at 1:30pm. Following the semi final the Rhode players and the massive contingent of supporter’s got a 2 hour break before the Leinster Final . The final was a wonderful game to watch throughout and went down to the wire but unfortunately it was not to be for the young future stars as Clontarf were crowned Leinster champions.  Interestingly Rhode had more scores but the old cliche goals win games. Final score read Rhode 3-11 Clontarf 8-02. The Management , players and supporters can be very proud  for their wonderful performance through out the day. Following the game Rhode received their silver medals to great cheers of the proud Rhode support. They may feel disappointing but can be very proud of their achievement .

A massive thank you to all the supporter’s who traveled up to watch the young lads it was great to see.

The players and management would like to thank Colm killeen for sponsoring their tops, Kieron Dunphy for supplying refreshments for the day and Niall Otoole for the minerals and crisps on their return to Rhode. It was very much appreciated.

Rhode Junior A footballer’s take on Clara on Sunday  July 22nd  in Clara at 12 midday.

Very best of luck to Rhode U’13 footballer’s who take on Na Fianna on Friday July 20th  in the u’13 league final in Ballycommon at 7:30pm

Rhode Senior footballer’s will take on Cappincur in the Division 1 League Final at 7:30pm on Saturday July 28th in Clonbulloge .

Join Rhode GAA club in Commemorating the Centennial of Gaelic Sunday on Saturday August 4th ,  A hundred year ago in August 1918 Gaelic football teams played matches all over the country in defiance of the ruling British forces.  To replicate the game played against Edenderry in 1918 Rhode Senior footballers will be playing Edenderry in the Offaly Senior Championship at 6:30pm . Following the match we will be having a BBQ in Killeens @9pm with music by caz entry €10. Also on the night there will be a presentation to Rhode/Croghan Lourdes fund .

The GAA Cul Camps takes place this week in Rhode and Over 200 boy’s and girls will be taking part.

There was no winner of the Rhode GAA Lotto Draw that took place on the 9th of July for a Jackpot of €15,000.  The numbers drawn were 2 5 7 13.  The club would like to thank all those who supported the draw and thanks to Killeen’s for the use of their premises and for their help and cooperation.  The following matched three numbers and received €50 each.

PrevPreviousClean Sweep For Our Senior , Junior A & B Teams In Championship
NextLottoNext