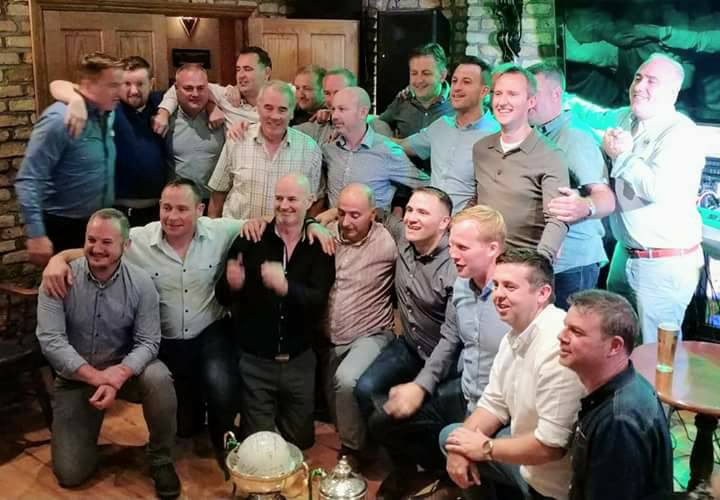 On Saturday Night Last the 1998 Team, Management and club officer;s of the time joined friends, family and supporters for what was a wonderful night of nostalgia and fun.  From 6:30 onwards the crowd packed the Croghan Lounge till late that night.  It was really a special night for the players especially those living away from Rhode coming back to meet old friends and teammates. Up first was the showing of the game and going by the reaction by all it was like it the game was only played the day before.

First to speak on the night was Chairman Joe Malone who payed special tribute to the team , management and officers of 1998 and how that long awaited victory opened the door to further successes in  later years . Joe also remembered the Late Club President Christy Darby and the Late Pat Colgan who was a Referee was tragically killed in 1998.  Joe Wished everyone a great night and invited Former Club Chairman Willie Dunne to say a few words. Willie spoke of the work that it took to get right management team in place and how the work paid off , Willie Stated that he was chairman for 9 years and loved very bit of it he thanked all those involved at the time especially  Patsy OGara/ Eden Aluminium the club sponsor at the time and for many years later. MCMichael Duignan then took over proceedings where he carried out a number of Interviews first up were Manager Eugene Mulligan  , Trainer Jimmy Dunne and Selector Martin Kerrigan great insights were giving of the year from training right up to the county final and the wonderful win.  Captain Pat Dingle Daly spoke passionately about that special year along side him was the great Johnny Mooney Player/Selector gave further great insight and stories. Lastly Roy Malone, Locky Murphy and Paschal kellaghan spoke about what it meant to them and had us in stitches with funny stories involving players .  Key to the organising of this event Ken Kellaghan spoke where he paid further tribute to the players, management, team physio Shiela Foy , thanking Michael Duignan for his wonderful job as Mc, Colm and Cathriona Killeen for sponsoring the event, Local Butcher Ray Dempsey looking after the BBQ, and his fellom members of the organising committee. He then handed it over to the wonderful John Murrin and Co  who played well into the night. At the band break  the Auction took place and John Kilmurray bought the two All Ireland Tickets and in the raffle Richie Harnett  won the signed football. John beezy Glennon then spoke of his delight to be here at the event and what 1998 meant to everyone. Then it was back to the wonderful music which finished off a wonderful night.

Thanks also to the local press for their coverage of the event and our club throughout the year.

Rhode U,17 footballer’s take on St.Vincents this coming Wednesday evening at 7pm in Fr.Dowling Park Rhode. .

Rhode U,13s defeated Ferbane/Belmont in the Championship Shield Semi Final on a score-line of 3-09 to 2-07.

Rhode can now look forward to a Championship Shield County Final in a few weeks time.

Rhode Umder-age club entered a Leinster GAA Club Bua/Beko Draw and are one of the many winners from around Leinster to win €1500 worth of gear to further facilitate the work of our underp-age  coaches  in the club.

We are holding our 2018  Golf Classic  in Castle Barna Golf Club Daingean on Saturday September 8th .

Team  €160 The Format is Four-ball Scramble  with excellent prizes up for grabs.

A very happy  Anniversary to Jody and Bridgie Gunning who celebrated with their 50th Wedding Anniversary on Sunday last. .

There was no winner of the Rhode GAA Lotto Draw that took place on the 20th of August for a Jackpot of €20,000.  The numbers drawn were 6 11 15 23.  The club would like to thank all those who supported the draw and thanks to Killeen’s for the use of their premises and for their help and cooperation.  The following matched three numbers and received €25 each.